Steve Benen has once again tallied up all the guests on the five major Sunday morning chat shows, and as usual, Republicans rule the roost. The chart below shows everyone with 10 or more appearances, and 77 percent of them are Republicans: 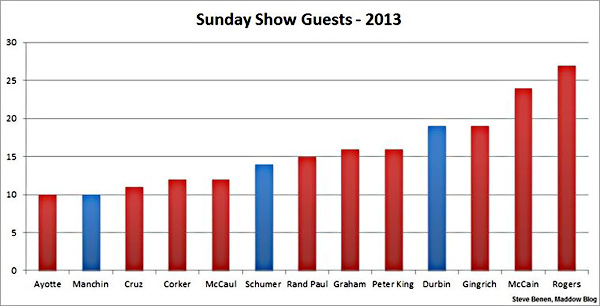 This really is a bit of a mystery. It’s easy to go on about how the Beltway media is obsessed with Republicans no matter who’s in charge, yada yada yada, but that’s not really a satisfying explanation. Nor is it because one side happens to have more charismatic leaders than the other: it’s true that neither Harry Reid nor Nancy Pelosi are on this list, but neither are John Boehner and Mitch McConnell. So what explains it? Are Republicans more aggressive than Democrats about getting themselves booked? Are Democrats more boring than Republicans? Do Republicans get better ratings? Is theatrical intransigence just fundamentally better TV?

UPDATE: Inquiring minds want to know more. There are more Republicans with 10 or more appearances, but that doesn’t tell us anything about total numbers. How many total Republicans and total Democrats made Sunday appearances in 2013? I asked Steve Benen for the raw numbers, and he kindly obliged.

Answer: 413 Republicans and 311 Democrats, counting all independents as Democrats. For the record, this counts only politicians: officeholders, former officeholders, candidates and potential candidates, etc. Strategists, pundits, and flacks for interest groups aren’t included. This is Democrats vs. Republicans, not liberals vs. conservatives.