Are you interested in the Trans-Pacific Partnership? No? I’ll confess that it leaves me a little glassy-eyed too. However, because so much of it deals with things like financial services, intellectual property, and drug patents, it’s spurred more wonk interest than old-school trade agreements that dealt mostly in reducing tariffs for tangible goods (food, textiles, cars, etc.). Gabriel Michael recommends this very brief Guardian listicle if 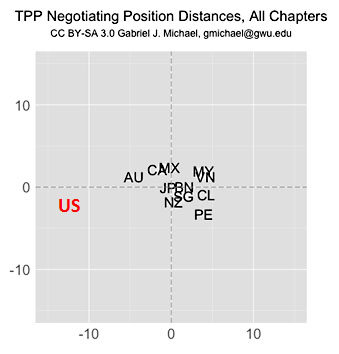 you want to get up to speed on the primary points of contention. I agree. It’s good. And very brief.

But wait! The TPP is interesting for another reason: WikiLeaks managed to get its hands on a draft copy of the treaty, along with comments about which countries were taking which position. Michael, who’s a PhD candidate at GWU, totted up all these comments to figure out the average positions of each country in the talks. As the chart on the right shows, it’s basically the United States vs. everyone else.

The numbers on the x- and y-axes don’t really mean anything. The only thing that matters on this chart is distance. And as you can see, 11 of the TPP countries are clustered pretty near each other, with Australia and Peru being modest outliers. And then there’s the United States, way off to the left, all by itself. Nor is this just a case of rich countries vs. poor countries. Even the other rich countries (Canada, Japan, Australia) are miles away from the US.

So that’s modestly interesting. You can click the link to see the US position on various specific provisions of the TPP. Overall, though, nationalists should be pretty happy. By all accounts, the Obama administration has been pretty hard-assed about protecting American interests, whether they’re justified or not.