I don’t know enough about Virginia (or New Jersey or New York City) to have much to say about their elections yesterday. So I was hoping that one of my Virginia friends would come through with a long, thoughtful email about the McAuliffe-Cuccinelli race, which I considered by far the most interesting of last night’s races.

In that race, Terry McAuliffe won a close victory even though the polls had him well ahead.1 Does this bode ill for Democrats? Sure, maybe. On the other hand, McAuliffe was an unusually unsympathetic candidate, and Republicans still couldn’t beat him in a state that looks increasingly like the country at 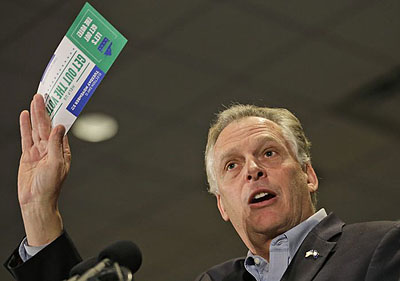 large. On balance, then, this really seems like bad news for Republicans no matter how they try to spin things.

However, one of my liberal Virginia pals had an interesting take on why Cuccinelli lost:

I agree with Erickson and First Read regarding a lot of the race-specific reasons for Cuccinelli’s loss. But, to me, the biggest mistake that Cuccinelli made was his initial tentative step toward making this a Tea Party campaign that downplayed economic messages in favor of his hot buttons — which, by the way, far and away most animated him on the stump (reminiscent of Santorum, almost).

This just doesn’t fly with the NoVa business interests. They’ll support any right wing crank as long as there is no daylight between them on business interests, taxes, etc. But Cuccinelli had the unnerving tendency to go headlong and unapologetically into his crusades at the expense of all else (e.g., massive and expensive witch hunt against UVA professor for climate change views, unqualified support for anti-abortion and contraception laws, and, of course, leading the doomed Obamacare challenges). In none of his crusades would business benefit in any significant way if he were successful. At the end of the day, he was spending significant resources to prove ideological points. Further, his attempted course corrections at trying to put his economic message front and center just lacked authenticity — more pro forma than passion. The business lobby wants the Governor out there selling Virginia, attracting business and jobs. Cuccinelli just seemed to be the worst salesman for this.

This speaks to all the recent chatter about whether the business wing of the GOP is finally fed up with the tea party and willing to do something about it. The message here isn’t that Cuccinelli was anti-business, but simply that he was so plainly animated by crusades on social issues that the business community didn’t trust him. They were afraid that at worst he might actively scare away business, and at best he’d never put any real energy into attracting it. McAuliffe, by contrast, is all about attracting business to Virginia. So the usual business-tea party partnership broke down.

I just thought I’d share this. Cuccinelli might be a bit of a unique character, but he’s not that unique. The business community might have fired a shot across the tea party bow last night.

1Will this be a boon for the folks who are convinced that mainstream polls are all skewed against conservatives? Maybe!