Megan McArdle is concerned that the price controls in Obamacare might stifle the pace of medical innovation. Today, she passes along a report in the Wall Street Journal about health care startups:

The only way to find out, of course, is to wait (though really, we’ll still end up arguing: If medical innovation falls, the law’s supporters can always say it would have fallen anyway; if it goes up or stays steady, the opposition can always argue that it would have risen further). But here’s one sign to watch: Venture-capital investment in medical technology seems to be falling fast.

Is this related to Obamacare? Frustratingly, it’s hard to tell. It’s not mentioned among the reasons cited in the Wall Street Journal article. But that doesn’t mean that it’s not among the reasons that venture capitalists are disinvesting; it just means it wasn’t mentioned. And one supposes that a tax on medical 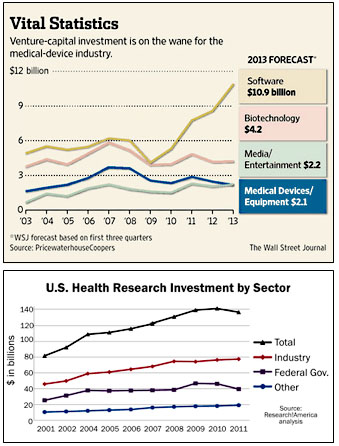 devices and a more stringent cost-control environment could hardly help.

I agree that innovation is a canary in the coal mine for the health care industry, and it’s one we should keep a close eye on. But I don’t think the evidence suggests that Obamacare is playing any role in our current investment slowdown.

Take a look at the two charts on the right. The top one is from the Journal article about venture capital investment, and as you can see, VC funding in biotech (the pink line) and medical devices (the dark blue line) peaked in 2007 and then started declining. There’s really no way that Obamacare can be at fault for that.

The bottom chart comes from Research America, and it’s an estimate of total health care investment. Again, as you can see, investment from private industry (the red line) flattened out starting in 2008. If these numbers were adjusted for inflation, they’d probably show a small drop.

But again, a trend that started in 2008 can hardly be blamed on Obamacare. The far more likely culprit here is a combination of well-known problems in health care research, which has been suffering from innovation problems for a while, and the recession, which slowed investment in a lot of areas. The federal government might have picked up some of the slack in basic research, but after a short-lived stimulus burst in 2009, federal research funding has been declining too, thanks to budget cutbacks and the sequester.

Pharmaceutical R&D has been troubled for some time, as significant new developments have become harder and harder to come by. That’s a problem. To add to that, the financial crisis has slowed down business investment in recent years. That’s also a problem. But it’s a stretch to suggest that Obamacare is related to either of them.

POSTSCRIPT: It’s worth mentioning that pretty much everyone agrees that we need to control the spiraling growth of health care spending. It’s like motherhood and apple pie. But one man’s growth is another man’s profit. Regardless of how we do it, if health care spending slows, then investment in the health care sector is likely to slow down too. I’m not sure how you get around that, aside from funding more R&D via the federal government.