Let’s talk about Darrell Issa. He’s a Republican attack dog, and that’s fine. Every party has people like that. But Issa is now the chairman of the House Oversight Committee, which means (in practice) that he’s the guy charged with harrying and annoying the Obama administration with maximum effectiveness. The problem is that he keeps misfiring. He has a habit of releasing partial transcripts that look incriminating but turn out to be nothingburgers once the full transcript comes out. He continues to press ludicrously overwrought theories that he simply can’t prove. Yesterday he got caught out once again when an administration witness flatly contradicted one of his latest wild charges. Steve Benen has the deets.

So here’s my question: Is Darrell Issa effective? My instinct is to say no: Republicans would be better off with someone who builds careful, methodical cases and scores some genuinely damaging points. But then, you’d expect me to say that, wouldn’t 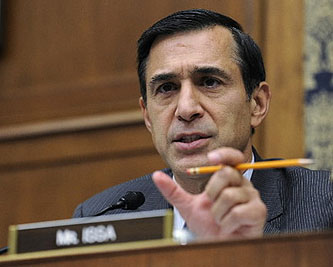 you? I’m the kind of person who appreciates careful and methodical cases.

Alternatively, the answer is that politics ain’t beanbag, and keeping up maximum pressure at all times is an opposition party’s best bet. If 99 percent of the mud you throw doesn’t stick, who cares? Shake it off and throw some more. Eventually you’ll find something damaging, and in the meantime all the mud really does have an effect. Low-information voters see a constant drip of spectacular charges and vaguely decide that where there’s smoke, there’s fire. They may not quite know what’s wrong, but it sure feels as if something is wrong.

So which is it? I can’t help but think that Issa really is hurting himself here by shredding his credibility on an almost daily basis. On the other hand, he’s been doing this stuff for three years now, and the press continues to eagerly lap up everything he says. No matter how many times he does it, they seem to be afraid that this time he might really have something, so they’d better play along.

I dunno. Issa’s ego is huge, but he’s no dummy. He obviously has reason to believe he can get away with this stuff forever. After all, during his Whitewater attack-dog days, Dan Burton pulled the same partial transcript trick that Issa loves, and it seemed to cause him no more than some momentary embarrassment. Maybe there really is method to his madness.