After last night’s collapse of John Boehner’s 87th attempt to forge some kind of plan to end the budget/debt ceiling crisis, the Senate is back in the driver’s seat. And oddly enough, today’s Senate plan is identical 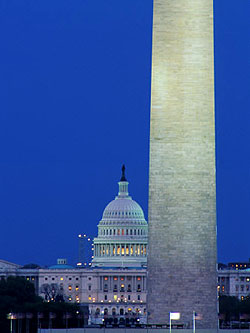 to yesterday’s Senate plan except for one thing: the sole provision that Democrats wanted has been jettisoned. So now the deal is that Republicans get a small bone in return for extending the CR and the debt limit a couple of months. Matt Yglesias figures this is bad news:

I think there’s a very strong chance we just do this all over again in the New Year. The conference committee will be at loggerheads over the question of tax increases. Hard-core conservatives will remain unreconciled to the idea of abandoning the struggle. Mainstream conservatives will continue to be loath to split the party. And the reality will be that the strategy of sticking with the majority-of-the-majority principle until the 11th hour and then passing bills with mostly Democratic votes is securing policy concessions from Democrats. So why not do it all over again?

I don’t really disagree, especially given the fact that apparently no one in the Senate can really think of a good reason that they’ll be able to meet their self-imposed December 13 deadline to come up with a permanent budget deal. But there is one reason to hold out a tiny ray of hope: midterm elections. The closer we get, the more likely it is that Republicans will be punished if they shut down the government yet again. Right now, the Senate deal extends the debt ceiling through February, and if you tack on another four or five months of “extraordinary measures,” it means the next debt ceiling crisis will start to heat up in July. Do Republicans really want to go through yet another hostage-taking scenario that close to Election Day? Or would they rather spend the summer telling horror stories about the rollout of Obamacare?

I’d say the latter. They may be insane, but they’re not stupid. So that leaves only the CR, and the odds are good that Republicans will basically win the CR battle by keeping sequester levels of spending in place. They won’t be able to win agreement on a bigger plan, but they’ll probably win the sequester battle—which, let’s face it, is a pretty big win. And with that, they’ll declare victory and go home.

Then, after next year’s election, maybe it will be grand bargain time again. Or maybe it will be yet more gridlock as we begin the death march toward the 2016 primaries. I really have no idea.

BY THE WAY: Remember all those people who have been chastising Wall Street for not taking the threat of a debt ceiling breach seriously enough? Well, guess what? The financial folks were assuming that Congress, yet again, would make a deal, but not until the very last second. And right now, it looks like they were exactly right. Maybe they’re not so out of touch after all.