Alex Tabarrok links to a short post today by a couple of researchers who study the transmission of ideas throughout history. Their conclusion is that the speed of diffusion depends on a country’s “genetic distance” from the source of the idea, and when I first read this I thought they were using genetic distance as a metaphor of some kind. That is, they were measuring the distance between various cultures, and the math happened to be similar to the math for measuring the genetic distance between human population groups, so that’s what they called it.

But no. The two researchers, Enrico Spolaore and Romain Wacziarg, are literally talking about population genetics:

Measures of average differences between vectors of allele frequencies (different genes) across any two populations provide a measure of genetic distance….The goal of this approach is not to study any genetic characteristics that may confer any advantage in development….On the contrary, they are neutral: their spread results from random factors and not from natural selection. For instance, neutral genes include those coding for different blood types….Instead, genetic distance is like a molecular clock — it measures average separation times between populations. Therefore, genetic distance can be used as a summary statistic for divergence in all the traits that are transmitted with variation from one generation to the next over the long run, including divergence in cultural traits.

Their hypothesis is that populations that are genetically more distant are also culturally more distant and are therefore more resistant to trading and adopting each others’ cultural traits. In the case of the Industrial Revolution, the epicenter was in Great Britain, so the adoption of new technology was strongly influenced by the genetic distance of different populations from Britain. Sure enough, they claim that was the case. The 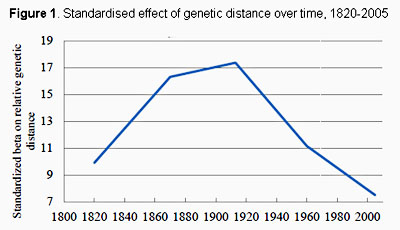 chart on the right shows the effect of genetic distance from Britain on the adoption of machine technology. It starts out fairly modestly, rises to a high level by 1913, and then declines as technology finally diffuses everywhere.

In a sense, this comes as no surprise. Genetic distance is pretty obviously correlated with both physical distance and cultural distance, so you’d expect that it might also correlate with the spread of ideas as well. Path dependence and deliberate policy (for example, colonial rules that deliberately inhibited the spread of technology) can then account for most of the rest. Spolaore and Wacziarg’s conclusion:

In sum, we find considerable evidence that barriers introduced by historical separation between populations are central to account for the world distribution of income….These results have substantial policy implications. A common concern when studying the persistent effect of long-term history is that not much can be done today. But if a major effect of long-term historical divergence is due to barriers, there is much room and scope for policy action. Populations that are historically farther from the frontier can benefit from policies that specifically aim at reducing barriers to exchange and communication.

Needless to say, “reducing barriers” is a two-edged sword. But it’s an interesting proposition nonetheless.