With Washington DC’s attention focused on the antics of Ted Cruz and the tea partiers, who are threatening to shut down the government unless Obamacare is defunded, it’s easy to lose sight of the bigger picture: Aside from Obamacare, the budget battles of the past three years have been exclusively about the Republican obsession with cutting spending while we’re trying to recover from the worst recession since World War II.

This is lunacy, and it’s the subject of “Death by a Thousand Cuts,” my cover story in the current issue of Mother Jones. The piece is framed around the famous Excel error in the paper by Carmen Reinhart and Ken Rogoff, but my point isn’t really to blame them for what happened. Their paper, predicting doom if U.S. debt levels went above 90 percent of GDP, provided important intellectual cover to the austerity zealots who wanted to use the recession as an excuse to hack away at spending on social welfare programs, but the truth is that the zealots would have done it anyway. R&R just made their job easier.

And they’re still at it. As I write in the story, conservatives remain obsessed with slashing spending despite the fact that (a) this is unprecedented in recent history and (b) the deficit has already been slashed repeatedly over the past three years:

First came budget deals in 2010 and 2011 that reduced the deficit by $760 billion. Then, in August 2011, Obama struck an agreement with Republicans to resolve the debt ceiling crisis, which produced about $1.1 trillion in spending cuts along with the promise of more from a congressional supercommittee. At the end of 2012, the fiscal-cliff showdown resulted in $850 billion in tax increases and spending cuts. Finally, in March, sequestration cuts (cued up when the supercommittee failed to produce a deal) kicked in, to the tune of another $1.2 trillion. Taken as a whole, these measures have cut the deficit by $3.9 trillion over the next 10 years. And that doesn’t even 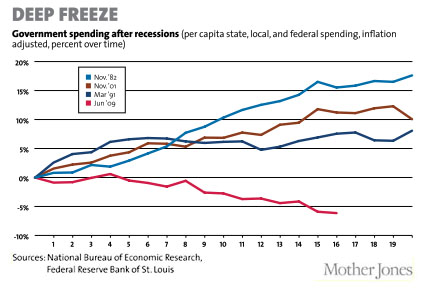 Because most state budgets are required by law to be balanced, it’s normally the job of the federal government to keep spending on an upward path during a recovery. But with federal outlays squeezed by all the budget deals, total government spending peaked in the second quarter of 2010 and then started falling, falling, and falling some more. Today, government spending at all levels—state, local, and federal combined—has declined 7 percent since the publication of Reinhart and Rogoff’s paper.

Government spending at all levels is far below the level of any other recent recovery. Sixteen quarters after the end of the recession, spending during past recoveries has been 7-15 percent higher than it was at the start. This time it’s 7 percent lower, despite the fact that the 2008-09 recession was the deepest of the bunch. Reagan, Clinton, and Bush all benefited from rising spending during the economic recoveries on their watches. Only Obama has been forced to manage a recovery while government spending has plummeted.

And there’s no end in sight. Ted Cruz will lose his battle to defund Obamacare. But the tea partiers have already won their battle to cripple the American economy and Obama’s presidency with it.