Take the massive, entrenched, years-long dispute over taxes and the federal budget. If you go into the survey data, you find that there absolutely is not a firm partisan divide on this issue. 56 percent of self-identified Republican voters agree with Barack Obama that deficit reduction should involve both spending cuts and tax increases and 56 percent of self-identified Democratic voters endorse the view that deficit reduction should be mostly spending cuts.

You never want to exaggerate the significance of this kind of issue polling. But I think the message is clear. If key Republican leaders—John Boehner, Mitch McConnell, Paul Ryan, etc.—wanted to shake hands on a bargain that raised taxes a fair amount and cut spending by three or four times that amount, Obama would gladly take the deal and a strong cross-party majority of Americans would applaud….But the deal keeps not happening. It doesn’t happen because at an elite level the Republican Party is much more strongly committed to an agenda of low tax cuts on the rich than are Republican Party voters.

Yglesias is obviously right about taxes, but I’m curious: Does everybody think that Obama is still gung-ho for a deal like this if he could get Republican agreement? It’s pretty obvious that he was in 2011, and possibly even through the end of 2012. But spending has been cut a lot since then, and an improving 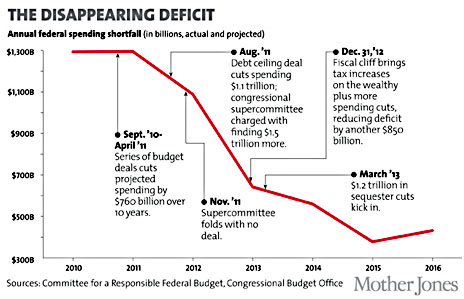 economy is going to cut it even further over the next few years. Tough talk aside, I’m not sure that even Republicans really want to cut discretionary spending much anymore.

So that leaves medium and long-term mandatory spending. In other words, Medicare, Medicaid, and Social Security. But Medicare reimbursements have already been cut by Obamacare, and were cut further by the sequester. Those cuts have been unpopular. Obamacare’s cost-cutting provisions might reduce spending even further, and those provisions have also been unpopular. Likewise, Social Security could, in principle, be the target of a combination of benefit cuts and tax increases, but that’s not very popular either, and at this point it’s not really clear if either party is much in favor of it.