As we all know, the NSA collects records of every telephone call made in the United States. Even if the rules governing the use of this information are highly restrictive, this still represents an enormous intrusion on the privacy rights of American citizens—something that FISA judge Reggie Walton acknowledged in a court opinion written in 2009. No court would ordinarily allow such bulk collection, he wrote, but the program had nonetheless been authorized due to the government’s insistence that it was “vital to the security of the United States.”

But is it? Plenty of people have wondered about this, especially since the NSA has never provided any public confirmation of a terrorism case in which the call record database played a key role. In fact, in a statement earlier this year, NSA director Keith Alexander was only willing to say that NSA’s surveillance programs had made a “contribution” to “our understanding” of 50 terrorist plots over the past dozen years. That’s pretty cagey, and it’s cagier still when you realize that he’s referring to multiple programs. He didn’t address the value of the phone record program by itself at all.

So what about it? Senators Ron Wyden and Mark Udall, who have seen classified briefings of all 50 plots, said in June that the call record program appeared to have “played little or no role” in most of these cases. Today, with the release of Judge Walton’s 2009 opinion, we learn that he has plenty of doubts too: 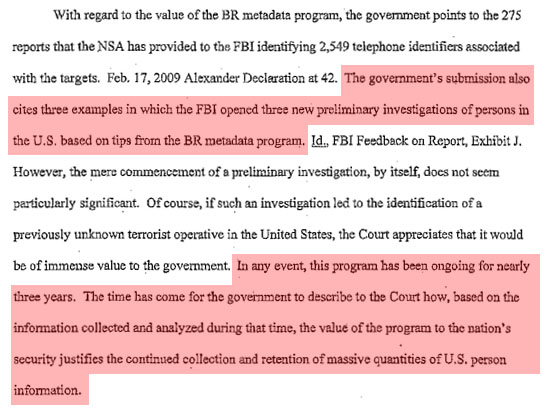 This was written in 2009, and as of that point the government could point to virtually nothing positive that had come out of the phone record program. The best it could point to was three (!) preliminary (!) investigations opened by the FBI.

It’s crazy that we permit this. The phone record program is (a) expensive, (b) prone to abuse, (3) a massive intrusion on privacy rights, and (d) not very successful. And that’s not all. It’s also the program that would be the easiest to shut down with virtually no ill effects. All we have to do is require phone companies to keep their call data for five years and require the NSA to get an individual warrant whenever they want to do a search of the database.

Would this be less convenient for the NSA? Sure. But for far less than we’re spending on the current program, NSA and the phone companies could almost certainly put together procedures and staffing that would provide close to the same level of service NSA gets now. We’d once again have true oversight, and since FISA judges are available 24 hours a day, even in an emergency there would be little risk of losing time simply because a warrant is required.

It’s a mystery to me why this hasn’t at least gotten serious discussion. Of all the NSA programs at the heart of the current controversies, this seems like the easiest call to make.