Last month we learned that in 2011 a FISA judge slammed the NSA for “the third instance in less than three years” in which an NSA surveillance program had been misrepresented to the court. Today, the Obama administration released a set of documents that describes one of the previous instances. It involves the NSA’s collection of phone records, which are supposed to be governed by strict minimization procedures that prevent analysts from illegally accessing the records of U.S. persons who are not reasonably suspected of terrorist ties. But it turned out that for three years, from 2006 to 2009, NSA had been routinely breaking its own rules; had been routinely providing false affirmations to the court; and apparently had no one on their staff who even understood how their own systems worked. Here is Judge Reggie Walton’s conclusion: 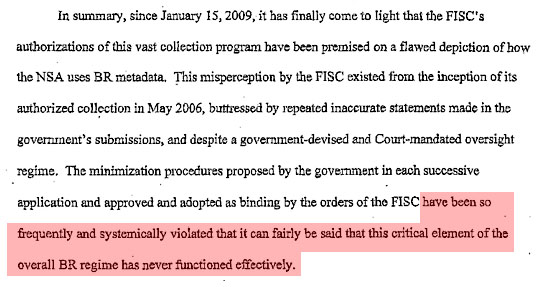 The NSA’s explanation for how these violations occurred “strained credulity,” Walton wrote, and because of that he shut down the phone record program entirely until the government put in place safeguards against abuse that satisfied him. Six months later, he finally allowed the program to restart.

Josh Gerstein has more details here. The main takeaway, however, is the obvious one: no agency can perform oversight on itself. NSA was violating the court’s rules for three years, and only discovered the problem because a spot check happened to turn up a violation, which in turn prompted them to do a broader investigation. That’s no way to ensure compliance with legal and constitutional standards.