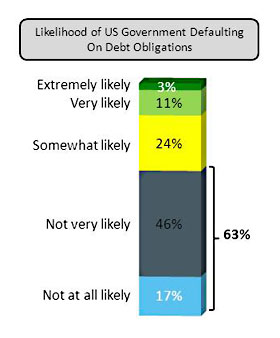 I’m not quite sure how seriously to take a poll by the National Center for the Middle Market, which focuses on companies with between $10 million and $1 billion in annual revenues, but I suppose it’s as good as any. Today, Jim Tankersley highlights an NCMM poll about the debt ceiling, which NCMM headlines, “Few believe a government default is a real possibility in the near future.”

But that’s not quite how I read it. The chart on the right suggests that 38 percent of the executives who responded think a default is likely. 38 percent! That’s a fair amount, and it’s likely to increase as we get closer to October 17. Unfortunately, it’s not clear exactly what this means. Does “defaulting on debt obligations” mean defaulting on treasury bonds? Does it mean holding up Social Security checks? Or does it mean not paying a few bills in a timely manner? These are very different things. Defaulting on treasurys would be catastrophic, and if that’s what these guys think might happen, they’re certainly a lot calmer about it than I would be.

Still, it’s true that 63 percent think this is all a big snooze, and that Congress will come to its senses after everyone has blown off a little steam. Unfortunately, this is why business leaders aren’t doing much to push for a solution, and it’s possible that the very fact of their listless attitude might be increasing the odds that they’ll be wrong.

So what will it take to end the debt ceiling crisis? Here’s a guess: a stock market crash. If we really and truly breach the debt limit without a resolution, markets will probably go crazy. In fact, they might go especially crazy because they seem so sure that it won’t happen. But that’s the one thing that always seems to get everyone’s attention. You can have failing banks, massive ranks of the unemployed, and auto giants going bankrupt—and Congress will twiddle its thumbs. But let the Dow fall a thousand points or three, and suddenly they spring into action. There are lots of ways this could end, but I wouldn’t be surprised if that turns out to be the winner.