“In retail, the customer tends to go to the right,” said Tim Taylor, the produce director for Lowe’s, Pay and Save, a regional grocery chain that let the scientists in to experiment with their arrows and mirrors. “But I watched when the arrows were down, pointing left, and that’s where people went: left, 9 out of 10.”

First things first: what’s the name of this supermarket? Pay and Save? Or Lowe’s? Good question! According to Wikipedia, Lowe’s Market, founded in 1940 in Littlefield, Texas, operates grocery stores under the names Lowe’s, Shop N Save, Food Jet, Super S, Big 8, Super Save, and Avanza. But not Pay and Save. Or do 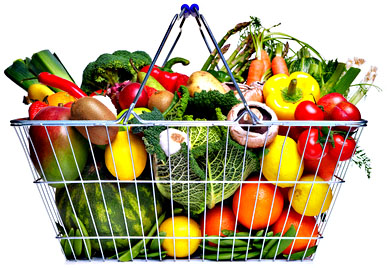 they? Comments from residents of El Paso, where this test store is located, are welcome on this score.

I’m a little less interested in the fact that if you lay giant arrows down on the floor, people follow them. We’re all pretty used to following arrows, after all. Still, the upshot of all this is that a pair of enterprising researchers were able to get people to buy more fresh produce by putting arrows on floors, duct tape in baskets, and placards in shopping carts telling people that bananas are big sellers. But if they put arrows on the floor and placards in the shopping carts, it didn’t work. Too pushy, apparently. People won’t buy healthy food if they glom onto the fact that they’re being badgered into doing it.

Personally, I’d like to see how this fares over a longer time scale. I have a feeling the effect might start to wear off. Plus there’s the problem of persuading grocery stores to do any of this stuff in the first place. Having spent billions on figuring out how to market crap to us, why would they suddenly turn around and start trying to market fresh produce to us? The Times suggests that produce actually has higher margins than crap, which is another surprise. I didn’t know that either. But if that’s really true, I’m a little surprised that big chains haven’t already spent billions trying to increase sales of apples and broccoli. Why are they relying on a couple of professors from New Mexico State University?

*Technically, the giant arrows only get you to buy more fruits and vegetables. Whether the guinea pigs in this experiment actually eat them is a whole different question.