If I told you that the American economy grew by more than 50 percent during Jimmy Carter’s presidency, you’d probably think I must be pulling a fast one. And you’d be right: inflation was high during Carter’s term in office, so most of that growth is an illusion. Adjusted for inflation, the economy grew 13 percent.

This is why reporters really, really need to stop writing stuff like this:

After 2½ years of budget battles, this is what the federal government looks like now: It is on pace, this year, to spend $3.455 trillion.

That figure is down from 2010 — the year that worries about government spending helped bring on a tea party uprising, a Republican takeover in the House and then a series of ulcer-causing showdowns in Congress. But it is not down by that much. Back then, the government spent a whopping $3.457 trillion. 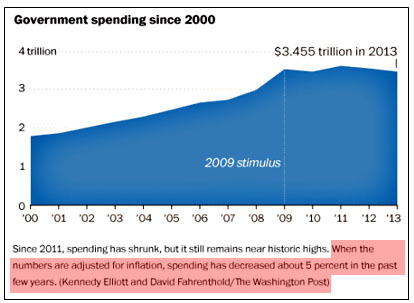 This is just flatly deceptive. Adjusted for inflation and population growth, federal spending has declined by 8 percent since 2010. In current dollars, it’s fallen from $11,800 to $10,900 per person.

The excerpt above comes from David Fahrenthold of the Washington Post, who wants to make the point that for all the screaming and shouting over the budget during the past few years, the size of government hasn’t really changed much. And that’s fine. If he wants to, he can make that point by noting that all the fuss has produced only an 8 percent decline from record highs. But what he can’t do—not honestly, anyway—is present nominal numbers in his lead and then again in a big chart, with only a tiny footnote to alert readers that he hasn’t accounted for inflation, let alone population growth.

I don’t have quite as big a problem with the rest of Fahrenthold’s story as some do. He’s basically making the point that Congress has a hard time cutting federal spending, and that’s perfectly true. If the Post thinks its readers are interested in why that is, fine. But along with the usual collection of horror-story anecdotes (roads to nowhere, tiny subsidized airports, etc.) they have an obligation to present the big picture honestly. They didn’t.