A draft of the proposal, obtained by The New York Times and likely to cause some consternation among colleges, shows a plan to rate colleges before the 2015 school year based on measures like tuition, graduation rates, debt and earnings of graduates, and the percentage of lower-income students who attend…“All the things we’re measuring are important for students choosing a college,” a senior administration official said. “It’s important to us that colleges offer good value for their tuition dollars, and that higher education offer families a degree of security so students aren’t left with debt they can’t pay back.”

Mr. Obama hopes that starting in 2018, the ratings would be tied to financial aid, so that students at highly rated colleges might get larger federal grants and more affordable loans. But that would require new legislation. “I think there is bipartisan support for some of these ideas, as we’ve seen in states where the governors have been working on them,” said the administration official, who spoke on condition of anonymity in order to disclose information not yet made public.

The basic idea here is that endlessly increasing the amount of federal student aid just isn’t working anymore. At this point, all it does is encourage universities to raise their prices, which means that students are no better off than they were before. In fact, maybe worse, since they end up graduating with ever more gargantuan loans to pay off. Instead we need to 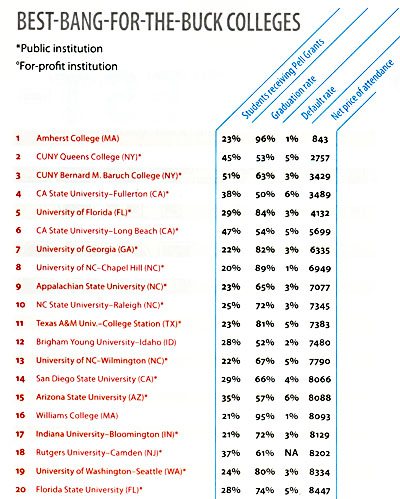 reward universities that actually provide a good bang for the buck: a solid education and high graduation rates at a reasonable cost.

Interestingly, this is very similar to the Washington Monthly’s “bang for the buck” ranking of colleges, which they started last year. Now, I have to confess that I’ve been sort of skeptical from the start of the Monthly’s attempt to rank colleges not on the basis of pure academic excellence but on the basis of how useful they are to society. I figured it was just spitting into the wind and would never catch on. Luckily, no one asked me and they kept plugging away at it. This year, in addition to pulling in lots of useful advertising dollars, I think they can legitimately feel like they’ve done something to advance the national conversation on higher education. The formula that the feds come up with will undoubtedly be different from the Monthly’s, but the idea will be the same. The Obama administration is basically proposing to do what they’ve been recommending for the past few years.

If you’re curious to see how various universities rank, click here. The top 20 are on the right, and I’m happy to see my alma mater coming in at #6. Nice work, 49ers!