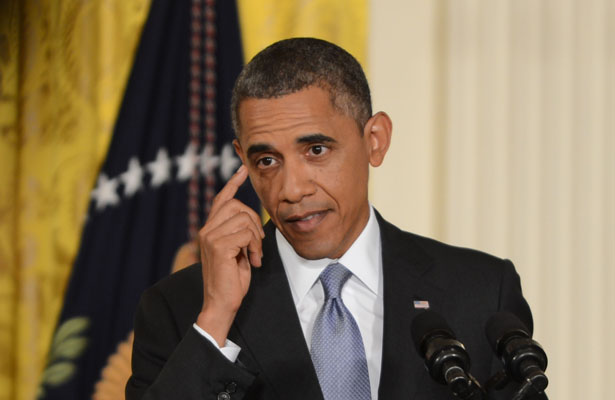 This is ancient news by blog standards, but I still feel the need to comment on President Obama’s singularly disingenuous remarks on Friday about Edward Snowden and the surveillance state. The fact that Obama doesn’t consider Snowden a patriot comes as no surprise. Presidents don’t generally approve of people who release large volumes of national secrets. But this was really too much:

Back in May…I called for a review of our surveillance programs….My preference — and I think the American people’s preference — would have been for a lawful, orderly examination of these laws, a thoughtful fact-based debate that would then lead us to a better place. Because I never made claims that all the surveillance technologies that have developed since the time some of these laws had been put in place somehow didn’t require potentially some additional reforms. That’s exactly what I called for.

….There’s no doubt that Mr. Snowden’s leaks triggered a much more rapid and passionate response than would have been the case if I had simply appointed this review board to go through, and I had sat down with Congress and we had worked this thing through. It would have been less exciting. It would not have generated as much press. I actually think we would have gotten to the same place, and we would have done so without putting at risk our national security and some very vital ways that we are able to get intelligence that we need to secure the country.

Please. Only a five-year-old would read that May speech and believe that Obama had any intention of either releasing significant information about our surveillance state or proposing any kind of serious reforms. That speech was mostly about drones—because, tellingly, Obama had been forced into it by recent news stories. In a 7,000-word speech, he devoted approximately three sentences to surveillance. It was little more than an afterthought, and his only concrete proposal, after four years in office, was a laughably buck-passing decision to set up a commission and then hope everyone would forget about the whole thing. Roger McShane called Obama’s Friday press conference “surreal, in a Kafkaesque sort of way,” but it was worse than that. It was a president treating us all like idiots. Does anyone seriously believe that even the very moderate reforms Obama has proposed so far would have seen the light of day if he hadn’t been forced into it?

On a related note, Andrew Liepman, a former career CIA officer, says the NSA’s surveillance programs are both useful and highly constrained:

Let me break this to you gently. The government is not interested in your conversations with your aunt, unless, of course, she is a key terrorist leader. More than 100 billion emails were sent every day last year—100 billion, every day. In that vast mass of data lurk a few bits that are of urgent interest and vast terabytes of tedium that are not. Unfortunately, the metadata (the phone numbers, length of contact, and so forth, but not the content of the conversations) that sketch the contours of a call to your family member may fall into the same enormous bucket of information that includes information on the next terrorist threat. As Jeremy Bash, the former chief of staff of the CIA, memorably put it, “If you’re looking for a needle in the haystack, you need a haystack.”

Unfortunately, during the Snowden affair, many news outlets have spent more time examining ways the government could abuse the information it has access to while giving scant mention to the lengths to which the intelligence community goes to protect privacy. We have spent enormous amounts of time and effort figuring out how to disaggregate the important specks from the overwhelming bulk of irrelevant data.

This misses the point entirely. Speaking for myself, I believe Liepman. There are probably abuses here and there, but basically the intelligence community really isn’t interested in you unless you’re a likely terrorist.

But someday there will be another attack. Maybe something homegrown. And Liepman won’t be in charge. Some future administration will be in power at the time, and in the midst of national panic they might decide, in secret, to vastly expand the scope of how we make use of all this surveillance and who we decide to spy on domestically. That happened as recently as 2001, so it’s not as though it’s some kind of paranoid leap to think it could happen again if the capabilities exist. This is why I’d prefer to keep our capabilities constrained, and it’s why I’d like rules set in public by Congress and the courts. That’s no guarantee that we won’t go crazy, but at least it forces us to take some time and deliberate over things. It’s a thin reed, but at least it’s a reed. Right now we’ve got nothing to rely on except the political courage of a single person we don’t even know yet, and that’s worth almost nothing at all.