In non-immigration news today, House Republicans voted yet again to repeal a Bush-era law that mandates more efficient light bulbs. This has been a tea party hobbyhorse for years now, symbolizing their resistance to nanny state socialism and overbearing tyrannical government. Or something. In any case, they hold this vote every few months or so, but like all of these symbolic votes, it will go nowhere in the Senate. So it’s meaningless.

But it got me curious: did the federal government really ban incandescent light bulbs, as conservatives keep saying? In the past, I’ve been a little confused about this. The law clearly doesn’t explicitly outlaw incandescent bulbs, but it’s surprisingly hard to find a straight answer about whether, in practice, the new standards will force incandescent bulbs off the market. I went looking 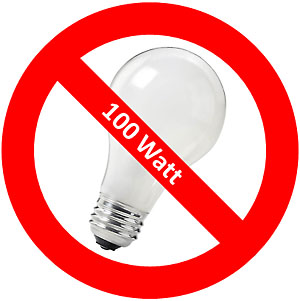 again tonight, and it’s still surprisingly hard to get a straight answer about this.

So I decided to perform some empirical research: I went to the store to see if I could buy an incandescent bulb. Both 75-watt and 100-watt bulbs are currently required to meet the new efficiency standards, so that’s what I looked for (60-watt bulbs, ominously, aren’t required to meet the new standards until Black Wednesday, the day Obamacare goes into effect). Did I find any?

No, I did not. Not at my local Ace hardware, not at my local Rite-Aid drug store, and not at my local Lowe’s. What’s more, the light bulb section at Lowe’s featured a big sign that said “DID YOU KNOW: Incandescent bulbs are being phased out.” You basically have a choice of LED, CFL, or halogen bulbs. 100-watt incandescents are a thing of the past.

Now, the halogens are pretty affordable. They go for a buck or two apiece depending on how many you buy. The others are more expensive but save a lot of money in the long run. So consumers are in fine shape and energy is being saved. It’s all good. Nonetheless, on the question of whether incandescent bulbs have been banned, I have to award this decision to the tea partiers on points. The law doesn’t say that incandescents are banned, but its practical effect has indeed been to make them unavailable. Colloquially speaking, it’s not a stretch to say they’ve been banned.