Dana Milbank complains today that President Obama’s new plan to focus on the economy shows that he’s “fresh out of ideas.” We now have copies of Obama’s big speech in Galesburg today, so let’s check it out. He says he has a five-point plan:

I’ll push new initiatives to help more manufacturers bring more jobs back to America. We’ll continue to focus on strategies to create good jobs in wind, solar, and natural gas that are lowering energy costs and dangerous carbon pollution….We’ve got more than 100,000 bridges that are old enough to qualify for Medicare…..And yet, as a share of 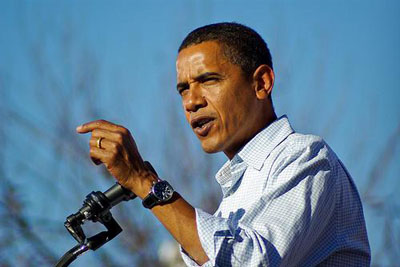 our economy, we invest less in our infrastructure than we did two decades ago. That’s inefficient at a time when it’s as cheap as it’s been since the 1950s.

…. The days when the wages for a worker with a high-school degree could keep pace with the earnings of someone who got some higher education are over….Which brings me to the second cornerstone of a strong middle class: an education that prepares our children and our workers for the global competition they’ll face….high-quality preschool available to every four year-old in America….spur innovation in our schools….high-speed internet….train workers for changing jobs….the soaring cost of higher education.

….A home of your own has been the clearest expression of middle-class security….Already, I’ve asked Congress to pass a good, bipartisan idea….to give every homeowner the chance to refinance their mortgage and save thousands of dollars a year.

…The fourth cornerstone….is a secure retirement….As we work to reform our tax code, we should find new ways to make it easier for workers to put money away, and free middle-class families from the fear that they’ll never be able to retire. And if Congress is looking for a bipartisan place to get started, they don’t have to look far: economists show that immigration reform that makes undocumented workers pay their full share of taxes would actually shore up Social Security for years.

….Fifth, I will keep focusing on health care, because middle-class families and small business owners deserve the security of knowing that neither illness nor accident should threaten the dreams you’ve worked a lifetime to build.

I hate to say it, but Milbank has a point. Obama’s manufacturing emphasis has always been a little quixotic, though I’m all in favor of investing in infrastructure and promoting green policies. Universal pre-K is a great idea, but there’s not all that much more the federal government can do on the education front. Homeownership is a nothingburger. Retirement is also a nothingburger if all it means is yet another tax-favored savings plan. And healthcare is already a done deal. Basically, Obama’s plan boils down to infrastructure and pre-K. I approve, but it’s not going to set hearts aflutter.

That said, I continue, as always, to wonder what prompts guys like Milbank to write stuff like this:

But while that message remains relevant, Obama is now facing a Republican opposition that, by House Speaker John Boehner’s own account, is measuring its success by how many laws it can undo….If he’s to break through the resistance, Obama will need some bold new proposals. That’s why his speech returning to the oldies would seem to confirm that the White House has given up on big achievements.

The reason Obama should be bolder is not because it might “break through the resistance.” He should be bolder precisely because it wouldn’t make any difference. If you’re going to meet an adamantine wall no matter what you do, why not shoot for the stars? At least that way you’ve made it clear whose side you’re on. Obama’s speech got in some good shots at the Republican Party’s continuing economic derangement, but he needs more than that.

None of this has the slightest chance of passage. But when you’re competing with a party whose message is about as subtle as a blood-and-guts slasher pic, you need something equally dramatic to show everyone what your party stands for. Dana Milbank still wouldn’t be happy, of course. He’d call you crazy. But that’s better than having him call you lifeless, isn’t it?