When California announced its healthcare premium rates under Obamacare, state officials cheered and detractors detracted. (What about the young men?!?) When New York announced its premiums yesterday, state officials cheered and detractors pointed out that the apparently low premiums were low only compared to New York’s previously sky-high premiums. So who’s right?

Today, Sarah Kliff draws our attention to a report from the Assistant Secretary for Planning and Evaluation at HHS. They gathered the average premiums for silver plans in the eleven states that have announced rates so far, and compared it to the forecast from the Congressional Budget Office. Basically, they took CBO’s estimate of $15,400 for the second lowest-cost silver family policy in 2016, and did a bit of extrapolation to get a forecast rate of $4,700 for an individual in 2014. That’s $392 per month, and due to data limitations, they’re comparing this to the lowest-cost silver plans announced so far, not the second lowest-cost. They figure the difference isn’t likely to be much. Anyway, it turns out that most of the plans so far are coming in under the CBO estimate: 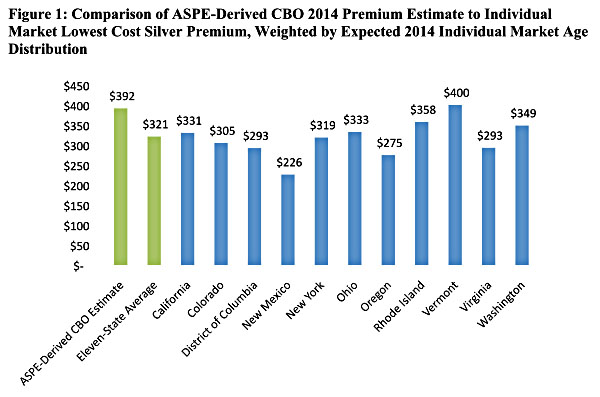 Kliff comments: “What’s striking, to me at least, is that premiums look relatively similar despite wildly different rhetoric across the country….When California announced its rates, the Democrat-led state celebrated how affordable prices came in. When Ohio released data, it derided how expensive health insurance would be under the federal reforms. In actuality though, Ohioans and Californians will see pretty similar premiums on the new marketplaces. There’s a $16 difference between the two states.”

Also, as always, note that these are raw premiums. Anyone with a low income will get subsidies from the government, so the actual price they pay will be even lower. And the prices for bronze plans will be lower yet.