John McCain, who never met a war he didn’t like, got into a heated exchange last week with Army Gen. Martin Dempsey, the chairman of the Joint Chiefs of Staff. McCain, who was unhappy because Dempsey declined to tell him what private advice he had given President Obama about intervention in Syria, subsequently threatened to put a 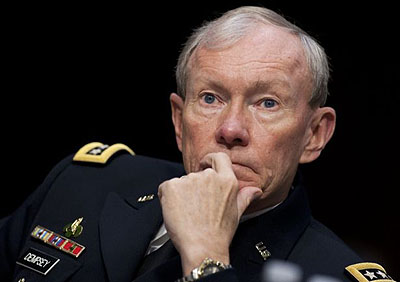 hold on Dempsey’s nomination for a second term.

Today McCain got his answer in a letter to the Senate Armed Services Committee. After laying out five options for military intervention in Syria, Dempsey made his feelings clear:

All of these options would likely further the narrow military objective of helping the opposition and placing more pressure on the regime. We have learned from the past 10 years; however, that it is not enough to simply alter the balance of military power without careful consideration of what is necessary in order to preserve a functioning state. We must anticipate and be prepared for the unintended consequences of our action. Should the regime’ s institutions collapse in the absence of a viable opposition, we could inadvertently empower extremists or unleash the very chemical weapons we seek to control.

I know that the decision to use force is not one that any of us takes lightly. It is no less than an act of war. As we weigh our options, we should be able to conclude with some confidence that the use of force will move us toward the intended outcome….Deeper involvement is hard to avoid.

Translation: You guys thought Afghanistan and Iraq were both brilliant ideas, didn’t you? Cakewalk city. Maybe this time you should think a little harder. Something tells me this wasn’t the private advice McCain was hoping to hear.