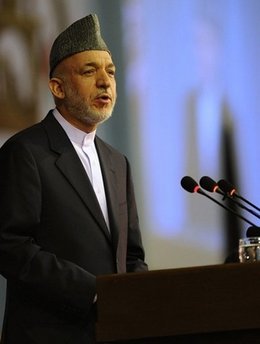 pulling out completely next year, without leaving behind even a small residual force:

A videoconference between Mr. Obama and Mr. Karzai designed to defuse the tensions ended badly, according to both American and Afghan officials with knowledge of it. Mr. Karzai, according to those sources, accused the United States of trying to negotiate a separate peace with both the Taliban and their backers in Pakistan, leaving Afghanistan’s fragile government exposed to its enemies.

Mr. Karzai had made similar accusations in the past. But those comments were delivered to Afghans — not to Mr. Obama, who responded by pointing out the American lives that have been lost propping up Mr. Karzai’s government, the officials said.

The option of leaving no troops in Afghanistan after 2014 was gaining momentum before the June 27 video conference, according to the officials. But since then, the idea of a complete military exit similar to the American military pullout from Iraq has gone from being considered the worst-case scenario — and a useful negotiating tool with Mr. Karzai — to an alternative under serious consideration in Washington and Kabul.

I won’t say I’m thrilled about how or why this is happening, but I like the end result. It’s long past time to pull out of Afghanistan completely, and a residual force would serve little purpose except to make itself a target if and when the Afghan state implodes. We’ve now been in Afghanistan for more than a dozen years, and the plain truth is that if they can’t stand on their own now, they never will.

And they might very well not. I can fully sympathize with Karzai’s impossible position here, regardless of what I think of him more generally. He’s got limited tribal support, no real control of the country much outside Kabul, a woefully undertrained military and police force, and the Taliban ready to restart its civil war at the first opportunity. And on top of this, he gets the blame every time we Americans do something to inflame the population. It’s impossible.

But it’s no less impossible with us around—unless, of course, Karzai wants us around for the next 50 years, which is probably how long it would take for Afghani politics to stabilize. But he doesn’t, and neither do we. So it’s time to cut the cord. For good and ill, we’ve done everything we can. Afghanistan’s future is now up to the Afghans.