David Cloud of the LA Times continues to provide some of the best reporting from Syria. A couple of months ago he reported that the Pentagon had deployed about 200 troops to Jordan, near the border of Syria, with instructions to help deliver humanitarian aid “and to plan for possible military operations, including a rapid buildup of American forces if the White House 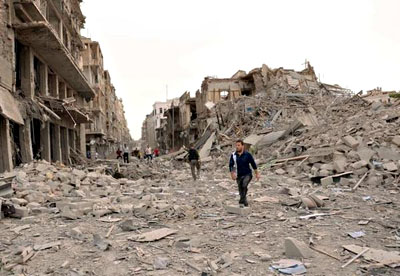 decides intervention is necessary.” Today he has more:

CIA operatives and U.S. special operations troops have been secretly training Syrian rebels with anti-tank and anti-aircraft weapons since late last year, months before President Obama approved plans to begin directly arming them, according to U.S. officials and rebel commanders.

….The training has involved fighters from the Free Syrian Army, a loose confederation of rebel groups that the Obama administration has promised to back with expanded military assistance, said a U.S. official, who discussed the effort anonymously because he was not authorized to disclose details.

The number of rebels given U.S. instruction in both countries since the program began could not be determined, but in Jordan, the training involves 20 to 45 insurgents at a time, a rebel commander said….The two-week courses include training with Russian-designed 14.5-millimeter anti-tank rifles, anti-tank missiles, as well as 23-millimeter anti-aircraft weapons, according to a rebel commander in the Syrian province of Dara who helps oversee weapons acquisitions and who asked his name not be used because the program is secret.

It’s obvious that President Obama is genuinely hesitant to intervene further in the Syrian civil war. Unfortunately, it’s also obvious that there’s more intervention going on all the time, and it’s happening in ways that can easily escalate. Cloud’s reporting on this has been invaluable, and it deserves more attention than it’s gotten.