From Ben Bernanke, appended to a Princeton commencement address that started out by noting that he “wrote recently to 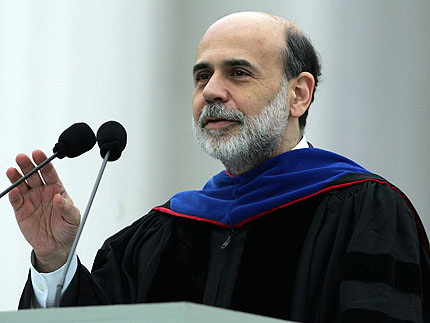 inquire about the status of my leave from the university”:

Note to journalists: This is a joke. My leave from Princeton expired in 2005.

He’s a sly one, that Ben. The part of his address that’s getting the most attention, however, is this:

The concept of success leads me to consider so-called meritocracies and their implications. We have been taught that meritocratic institutions and societies are fair. Putting aside the reality that no system, including our own, is really entirely meritocratic, meritocracies may be fairer and more efficient than some alternatives. But fair in an absolute sense? Think about it. A meritocracy is a system in which the people who are the luckiest in their health and genetic endowment; luckiest in terms of family support, encouragement, and, probably, income; luckiest in their educational and career opportunities; and luckiest in so many other ways difficult to enumerate–these are the folks who reap the largest rewards. The only way for even a putative meritocracy to hope to pass ethical muster, to be considered fair, is if those who are the luckiest in all of those respects also have the greatest responsibility to work hard, to contribute to the betterment of the world, and to share their luck with others. As the Gospel of Luke says (and I am sure my rabbi will forgive me for quoting the New Testament in a good cause): “From everyone to whom much has been given, much will be required; and from the one to whom much has been entrusted, even more will be demanded.”

There’s nothing original about this, but it’s interesting to hear from a guy who’s still nominally a Republican. Of course, maybe this means he isn’t anymore. It’s been a very long time since I’ve heard anyone who’s right of center acknowledge this obvious truth, and longer still since I’ve heard anyone who’s right of center support policies that acknowledge this in any concrete kind of way. These days, being on the right means little more than cutting taxes on the rich and cutting spending on the poor. There’s no place any longer for the Ben Bernankes of the world there.