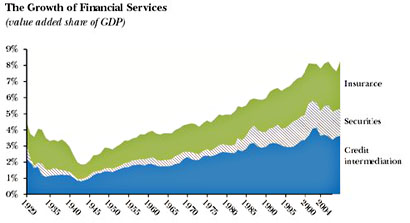 Bruce Bartlett writes today about the relentless financialization of the American economy and the danger it poses:

Ozgur Orhangazi of Roosevelt University has found that investment in the real sector of the economy falls when financialization rises….Adair Turner, formerly Britain’s top financial regulator, [suggests] that the financial sector’s gains have been more in the form of economic rents — basically something for nothing — than the return to greater economic value.

Another way that the financial sector leeches growth from other sectors is by attracting a rising share of the nation’s “best and brightest” workers, depriving other sectors like manufacturing of their skills.

The rising share of income going to financial assets also contributes to labor’s falling share….This phenomenon is a major cause of rising income inequality, which itself is an important reason for inadequate growth.

The dangers of runaway financialization are pretty well known and pretty well accepted. Given that, the key question you should ask is: Why? It’s not inevitable, after all. The finance industry doesn’t grow because some fundamental feature of the modern economy demands it. In fact, it’s really more mysterious than it seems. After all, we know why, say, the car industry grew during the 20th century: because more people wanted cars. Likewise, we know why the tech industry is growing now: because more people want to surf the net and play video games.

So why has finance grown? Because the world needs more finance? Up to a point, sure: availability of capital is a key requirement for economic growth in a modern mixed economy. But we passed that point quite a while ago. Capital has been freely and easily available in America and most of the developed world for decades. So again: Why the continued growth? It doesn’t seem to be demand driven, so there must be some other reason. Anyone care to guess in comments? No prizes for the right answer, I’m afraid.