Via Dylan Matthews, here’s a chart from a study that looks at the experience of the North Carolina Growers Association in hiring native-born workers. NCGA is required to heavily advertise for native workers before their applications for H-2A guest worker visas are approved, but these efforts seldom pay off. Even when unemployment was at its height in 2011, they received a grand total of only 268 referrals. They hired 90 percent of the applicants, but only 163 showed up for work on their first day—and that was the best response in NCGA’s history. The chart below shows what happened next: 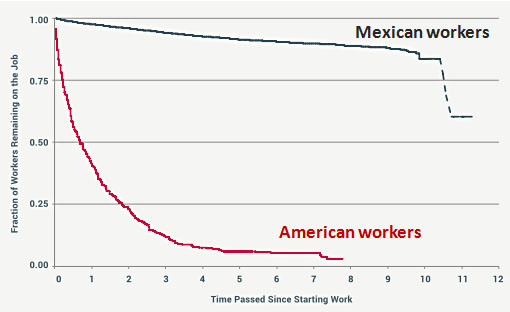 Within two months, 80 percent of the native workers had quit. By the end of the growing season, only seven were left.

Now, as Matthews notes, this report doesn’t exactly come from a neutral source. It’s from a pro-immigration group working with a group of pro-immigration farmers. But unless they’re flat-out lying here, the numbers are pretty compelling. Most Americans just aren’t willing to do backbreaking agricultural labor for a bit above minimum wage, and if the wage rate were much higher the farms would no longer be competitive.

Anyone want to send me some contrary evidence? I’d be interested to see it. But all the evidence I’ve seen in the past points in the same direction as this study: it’s all but impossible to get native workers to fill field labor jobs. Immigrants really are doing the work we won’t.