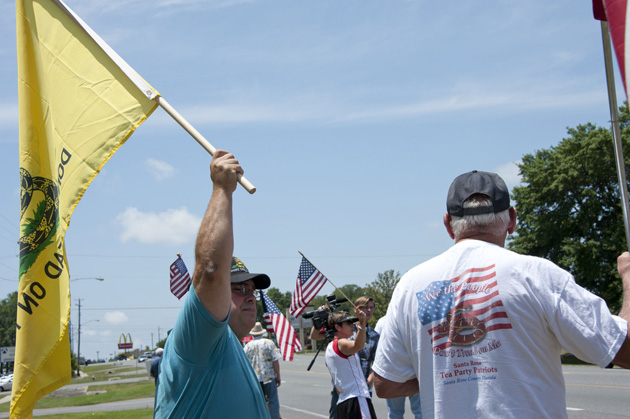 Perhaps this is just because I read David Foster Wallace’s posthumous novel The Pale King recently, but I actually feel kind of sorry for the IRS. Frankly, their job seems almost impossible. Think about it: they have to process over a hundred million claims a year, several million of which are highly complex. That means they need a huge number of people. And these people need to be fairly smart, because this isn’t simple work. But it is boring work. In other words, the IRS needs tens of thousands of people who are (a) smart, (b) willing to do really tedious work, (c) for moderate wages, (d) while working for a soul-crushing bureaucracy, and (e) being loathed by all right-thinking people.

Does this sound to you like a recipe for disaster? Me too. Frankly, the biggest surprise about the tea party targeting scandal isn’t that it happened, but that there haven’t been a lot more like it. After all, it wouldn’t take much. Nobody ever lost an election by demagoguing the IRS, which means they’re always under a high-powered microscope from ambitious politicians. Or in some cases, under something more like a proctoscope, as in the case of the infamous 1998 Roth hearings, described here by yours truly a while back:

One of the great scams of the 90s was the Roth Hearings, a brilliant piece of performance art staged by Senator William Roth as an attack on the Internal Revenue Service. The hearings were deliberately dramatic: Roth held them in a committee room designed to block electronic eavesdropping and had guards search everyone before they entered the chamber. IRS employees called as witnesses were blocked by black curtains and had their voices electronically altered, like mobsters afraid of being murdered in their sleep.

The testimony was equally dramatic: IRS agents, they said, routinely made false accusations against people, busted into people’s homes and waved guns in their faces, and once even forced a girl caught in a raid to change her clothes while agents watched.

As it happens, virtually none of this was true, but that didn’t matter. Republicans lined up to denounce the IRS as “Gestapo-like” and a law was quickly passed that handcuffed agents and slashed the budget for audits and enforcement, especially against high-income taxpayers. It was a boon for the rich in the same way that it would be a boon for drug dealers and street criminals if Congress slashed the budgets of local police departments.

Generally speaking, the end result of all this was a reduced auditing budget, which made life much easier for America’s millionaires and billionaires, and a reined-in operating budget, which made the IRS less able to do its job efficiently and more likely to screw up in some kind of spectacular way. Mission accomplished! Noam Scheiber reviews the recent cuts in the IRS budget since Republicans took over the House in 2010 and concludes that they had pretty much the same effect:

The just and logical result of this chain of events would be to discredit the people intent on starving government. Instead, the [tea party targeting] scandal has become a convenient talking point for opponents of government itself. The IRS uproar “probably represents the last shovelful of dirt on the central mission of Barack Obama’s presidency: rehabilitating Big Government’s reputation as a necessary first step toward a new Progressive Era,” wrote the economics commentator James Pethokoukis in National Review. More alarmingly, mainstream pundits are echoing this conclusion. “The IRS flap eats away at the underpinnings of what President Barack Obama promised when he first ran in 2008,” wrote the centrist columnist Jerry Seib the following week. “A revival of confidence that government is capable of solving problems in a smart and nonideological manner.”

I’m afraid Seib is right. As it’s currently playing out, the scandal probably is sapping confidence in government. But how we got to this point is no accident. It was the plan all along.

I’m happy to have the tea party targeting scandal thoroughly investigated. It looks to me mostly like a failure of management and overworked staffers, not a partisan hit job, but hey—you never know until you investigate. So investigate away. But I sure hope this doesn’t turn into a rerun of the Roth hearings. Those were not just a travesty, but a travesty that’s all too likely to repeat itself since no one, Democrat or Republican alike, ever wants to stick their necks out for the universally reviled IRS. Because of that, this could turn into a Roth-esque feeding frenzy just through sheer unchecked momentum. Hopefully, there’s someone in Congress with the guts to keep this investigation on track, even if it does mean running the risk of being branded pro-IRS.