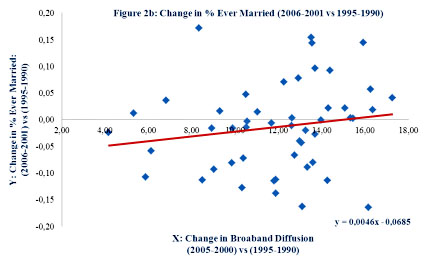 Via Brenda Cronin, here’s a fascinating study suggesting that faster adoption of broadband internet leads to higher marriage rates. The author, Andriana Bellou of the University of Montreal, presents the basic regression chart on the right, and then runs through a variety of tests to find out whether this is really a causal relationship. After all, maybe tech-friendly places have always produced higher marriage rates. Or maybe sociable people like the internet and also like getting married. Or it could be that causality runs in the other direction: maybe people who are more likely to get married are also more likely to move to tech-friendly places. Etc.

Bellou takes a variety of strategies to test causality. For example, it turns out that broadband penetration in 2000-05 doesn’t predict marriage rates in the pre-internet era (1990-95). This suggests that her results aren’t due to something special about the geographic areas that eventually adopted broadband at high rates.

Long story short, her conclusion is that this association is probably causal. Other things equal, better access to the internet really does produce a greater number of marriages. eHarmony really does work.

In a way, this isn’t too surprising, but there’s obviously a lot of noise in the data. I’ll be interested to see if her result holds up once the rest of the world starts banging away on it.