“White House Under Siege” is too juicy a narrative to pass up, especially during a slow news period, so that’s what we’re getting right now. But there are scandals and then there are “scandals.” The three that are currently erupting are all quite different. Let’s categorize them:

Benghazi. The truth is that this is no more of a scandal than it’s ever been. Right now Republicans are doing their best to keep this carnival act going, but President Obama was pretty much right yesterday when he said there’s no there there. That remains true even if Jay Carney was a little less than candid last November about the editing process of the infamous talking 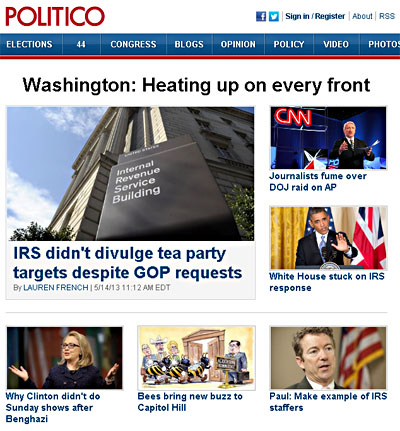 points. This whole thing is basically a fever dream invention of the right, and the public doesn’t seem any more interested in it today than it ever has been.

AP phone records. This is a policy scandal, perhaps, but not an abuse of power or example of corruption. As near as I can tell, the Justice Department followed the law scrupulously here, obtaining a warrant for the records and then informing AP of the warrant afterwards. Lots of people, including me, happen to think the law that allows this is a bad one, but that’s an argument about the PATRIOT Act and its followups. From a political point of view, Republicans are going to have a hard time making much hay with this because (a) most of them support the law that allows DOJ to do this, and (b) the American public doesn’t think very highly of the press and probably isn’t very outraged that they can have their phone records collected just like anyone else.

IRS targeting of tea party groups. This one is a genuine scandal, and it’s one that plays right into Republican hands. It’s also one that will resonate with the public. Politically, the question is whether the president can get out ahead of it. If he’s found to have had no hand in the original targeting, and is perceived as being sufficiently zealous in cracking down on it, it might not hurt him much. We’ll see.

There’s one wild card in all this: the media. They finally got personally annoyed over Benghazi when the spotlight turned to things that Jay Carney had told them personally, and the AP warrant also directly affects them. If this episode feeds into further media disenchantment with Obama, that could affect his press coverage going forward. In the end, that could end up being the worst fallout of all from this stuff.