The Congressional Budget Office has a new report out that tries to figure out who benefits the most from tax expenditures. This includes things like the exclusion of healthcare from income tax, the charitable deduction, the EITC, and so forth: money that’s essentially an expenditure, but is distributed via tax credits and deductions instead of by mailing checks to people. What the CBO finds is that the biggest beneficiaries are the poor and the rich: 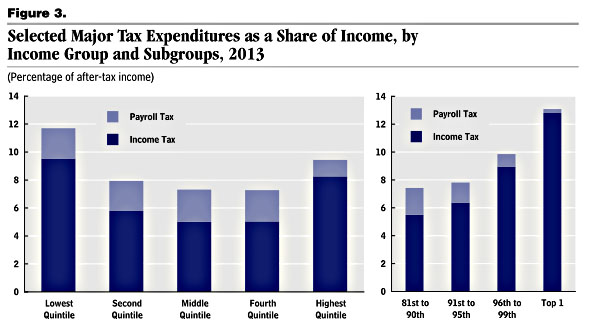 As it turns out, I have a couple of problems with this analysis. First, it includes the preferential tax rate on dividends and capital gains as a tax expenditure, one that obviously benefits the wealthy disproportionately. But I’m not sure that’s fair. Whatever you think of the preferential tax rate on investment income, it doesn’t really strike me as a tax expenditure. I suppose this gets us into angels-on-the-head-of-a-pin territory, since you could argue that low cap gains rates are a subsidy for investment that’s distributed through the tax code, but that seems sort of tendentious to me.

My other problem is with the three big tax deductions they study: mortgage interest, charitable contributions, and state/local taxes. These also disproportionately favor the wealthy. But for the non-wealthy, the tax code allows a benefit for these things in the form of the standard deduction. So if we’re going to make comparisons, don’t we need to tot up the benefit of the standard deduction for various income groups?

Even if you account for these things, the wealthy probably benefit more from tax expenditures than the middle class. And there are good reasons to think that capital gains rates should be less preferential than they are, regardless of whether or not they count as tax expenditures. Still, done properly, I suspect the chart above would be a lot flatter than it looks.