You can never get too much robot punditry, can you? So here are two more followups from my magazine piece on the coming rise of smart machines. First, an interview with Dylan Matthews over at WonkBlog. Here’s my take on what happens as we disemploy more and more people along the road to our eventual robot paradise:

It seems like if you have a huge section of people who are unemployed, who don’t really have resources but have a lot of spare time, then there’s a possibility of really huge political mobilizations on the part of those people, like you see in countries nowadays with mass unemployment.

I think that’s likely to be one of the things that happens along the way. Societies that suffer from mass unemployment, the history of what happens to those societies is not a bright one. At some point you have to respond, and there’s going to be a lot of resistance to responding because of ideology, because 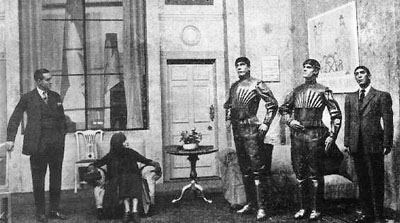 of politics, because of pure greed, but eventually we are going to respond to this. It’s going to be obvious what’s happening, that people are unemployed due to no fault of their own, and that we have to respond.

OK, fine, that wasn’t the most lucid description of the problem ever. In a few years a robot will be able to make a better fist of it. But you get the idea. The big question is: how long will it be before everyone finally caves in and admits that something new is happening, and we’re not just suffering from the same old economic problems as we have in the past?

And if that’s all a little too heavy for you, check out Ryan Jacobs’ brief history of awesome robots, from RUR to LS3. Here’s hoping that our future is more R2D2 and less Terminator.