I hate to say this, but the media is losing me. I’m mostly on their side when it comes to subpoenaing journalists’ phone records, but the level of outrage and special pleading has gotten so palpable that I’m starting to waver. Aren’t they supposed to at least feign objectivity, even when the subject is something that affects the press?

It’s worse in some places than others. Roger Ailes, for example, released a histrionic statement yesterday about “the administration’s attempt to intimidate Fox News.” Sure, Roger. Other places it’s only slightly more subtle. This 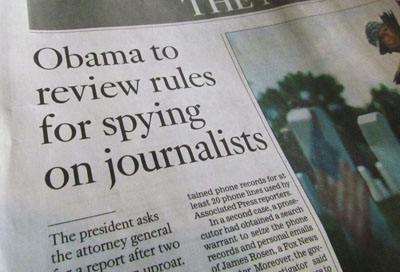 morning’s LA Times, for example, greeted me with the headline on the right. If the subject were, say, wiretaps on organized crime rings, would the Times have written a headline about “spying on mafia dons”? I don’t think so.

The two cases that have everyone exercised at the moment mostly seem to be justified. As Cheryl Rofer points out, Stephen Jin-Woo Kim basically acted like an idiot, apparently leaking information to James Rosen without even quite realizing how damaging it was. There’s no government in the world that would tolerate that kind of behavior from someone in a sensitive position who knew the rules. We know less about the AP case, but it certainly seems to have involved the release of information (the existence of an Al Qaeda mole) that the government had a legitimate reason for keeping secret.

Does this mean the government should be able to pursue these cases by getting warrants for reporters’ phone records? I think the bar should be very, very high for that. Should the government be able to prosecute reporters for publishing classified information? I’d say the bar should be almost insurmountable for that. Even making the suggestion in a warrant application, as they did in the case of Rosen, is going too far for my taste.

Nevertheless, the government has an obvious interest in trying to keep its intelligence operations secret. The existence of an Al Qaeda mole and the existence of high-level sources within North Korea are both classic cases of this. There’s no whistleblowing or government misconduct here. When those kinds of secrets are blown, the feds legitimately want to know which nitwit is doing it. Sometimes that may justify getting a warrant to look at journalists’ phone records. The rules for this ought to be more stringent than they are, but the First Amendment isn’t a magic pass here.