Dylan Matthews highlights a fascinating little chart today. Roughly speaking, it plots two things for 18 different countries: (a) how much the rich have gotten richer over the past 50 years, and (b) how much tax rates on the rich have gone down during the 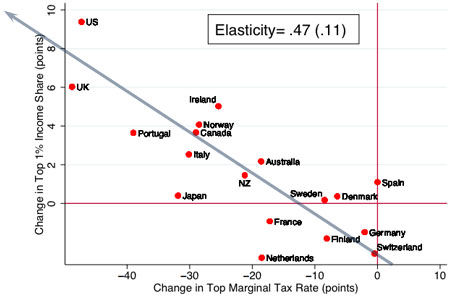 same period. Guess what? It turns out that in countries where the rich got the richest, they also enjoyed the biggest tax cuts:

How to interpret this is a difficult question to answer…. Lawrence Lindsey and Martin Feldstein have argued that cuts in rates led to increased economic activity among top earners, leading to more growth and income. That’s the conventional supply-side story. But you could also tell a story where lower tax rates increased the after-tax income of the rich, and that in turn increased their political power, which produced still lower rates.

It’s possible, of course, that there are data interpretation issues here, so these results should be taken tentatively for now. Still, the cross-section of countries is fairly large; the results don’t depend solely on the effect of the United States; and the slope of the line is pretty dramatic. So there’s probably something here.

But what? I can only guess, but I’d offer a third possibility. It’s not just that low taxes produce harder-working rich people, or that richer rich people produce the political power to cut taxes. It’s broader than that. Essentially, when an entire country gets persuaded that what’s good for the rich is good for everyone, that creates support for a wide range of policies that benefit the rich. Low tax rates are one of them, but I suspect you could draw a chart like this for a number of other public policies as well (unionization rates, financial deregulation, etc.).

In the United States, the conservative movement has been astonishingly successful at persuading the public that “free market” policies which benefit the rich will trickle down to everyone. In Germany, not so much. As a result, public policies in the U.S. benefit the rich, and the rich also get ever richer. In Germany, they don’t.