Which do you learn more from? A presenter with good speaking skills and professional visual aids, or someone reading badly from prepared notes? Oddly enough, a team of psychologists 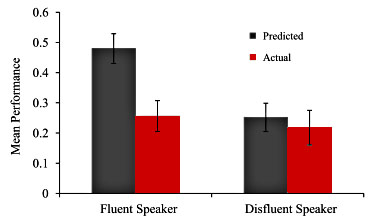 actually decided to test this. Their test subjects, as usual, were university students:

If these results hold up, it means that flashy, TED-style lectures don’t actually impart any more knowledge than boring old-school lectures. But they do make you more confident that you learned something. Is that worthwhile all by itself? Or is it better to have a proper grasp of just how much you really know? I’ll leave that as an exercise for the reader.

POSTSCRIPT: And what’s this business about calico cats? Well, that was the subject of the test lecture. Roughly speaking, cats are white by default, and their two sex chromosomes each add a color to their coat. Color is carried on the X chromosome, so female (XX) cats can potentially be tricolored (orange, black, and white). Male (XY) cats max out at two colors (white plus one other). So with rare exceptions, only female cats can be calicos.

POSTSCRIPT 2: Are you thirsting for a political angle to this? Well, Fox News is pretty well known for pioneering a much flashier, more visual approach to the news. Does this turn Fox watchers into tedious blowhards who think they know more than anyone else even though they don’t? I report, you decide.