I’ve now read the new study of the Oregon Medicaid experiment, as well as some additional commentary on it, and I think some of the results are important enough that they deserve a new post, not just updates to the previous post.

In a nutshell, Oregon held a lottery a few years ago in which some people received Medicaid coverage and others didn’t. Today’s study is a two-year followup, and the headline result is that “Medicaid coverage generated no significant improvements in measured physical health outcomes.” But it turns out that “significant” is doing a lot of heavy lifting here, and the headline is extremely misleading.

In fact, the study showed fairly substantial improvements in the percentage of patients with depression, high blood pressure, high cholesterol, and high glycated hemoglobin levels (a marker of diabetes). The problem is that the sample size of the study was fairly small, so the results weren’t statistically significant at the 95 percent level.

However, that is far, far different from saying that Medicaid coverage had no effect. It’s true that we can’t say with high confidence that it had an effect, but the most likely result is that it did indeed have an effect. The table below shows the point estimates. Note also that in all cases, the use of prescribed medication went up, in some cases by a lot.

Bottom line: It’s more likely that access to Medicaid did improve health outcomes than that it had zero or negative effects. It’s just that the study was too small to say that with certainty. For laymen, as opposed to stat geeks, the headline result of the Oregon study was “Possibly positive but inconclusive,” not “Had no effect.”

UPDATE: Even if they’re real, are these results worth the money spent? That’s a different question, and there’s just no way to answer it with this study. That would require a much larger, longer-term research project. 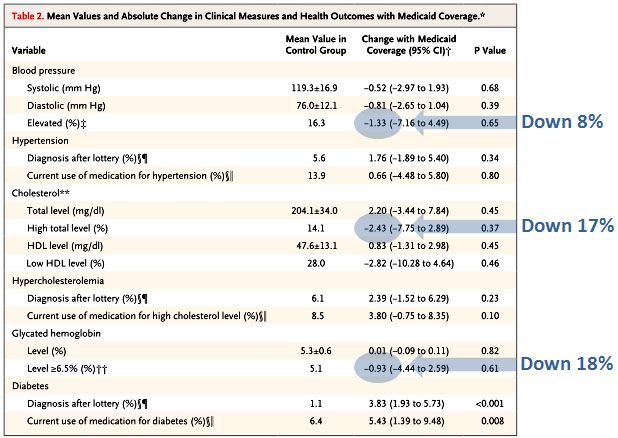