Maria Bustillos writes in Aeon that when she drives from Los Angeles to San Francisco, she always takes I-5, the most direct route:

This is the way I always go. Not only because it’s fastest, but because, despite the conventional wisdom, I find it the most beautiful of all. California natives 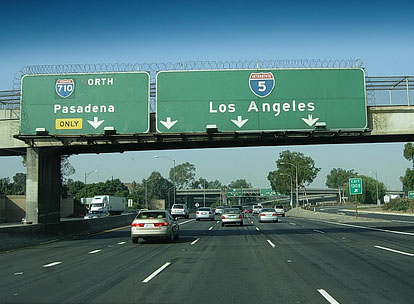 always call it just ‘The Five’: not Highway Five or Interstate Five or I-5.

Hoo boy. As soon as I read that I knew she was going to get some angry responses. Sure enough, here’s the very first comment:

“The” in front of a highway number is NOT a CA native expression! It is rather, a SoCal thing based largely on CHP and LAFD radio chatter. It has become widespread all over the west into Arizona, Nevada and even Oregon, but is roundly discouraged in The Bay Area and in Norcal.

I’m not sure about Oregon, but this is definitely a Southern California thing that has spread throughout the southwest. It goes north to about San Luis Obispo or Monterey, but stops there. It’s also, oddly enough, common in the Buffalo/Toronto area, but apparently nowhere else in the United States.

However, I don’t think there’s any evidence that this habit is based on CHP or LAFD chatter. Unfortunately, it’s not clear what it is based on, since none of the explanations I’ve ever heard have really been convincing. The full story is here: Part 1, Part 2, Part 3.