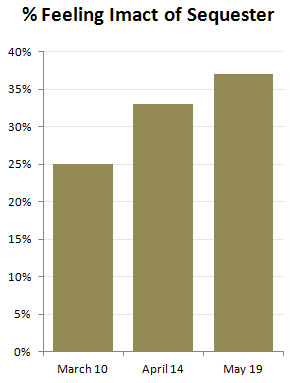 The number of people who are feeling the effect of the sequester continues to rise. It’s now up to 37 percent, and unsurprisingly, that’s affecting what people think of it:

More Americans continue to disapprove than approve of sequestration, now by 56-35 percent — again, a view influenced by experience of the cuts. Eight in 10 of those who report serious harm oppose the cuts, as do about two-thirds of those slightly harmed. But the majority, which has felt no impacts, divides exactly evenly — 46 percent favor the cuts, vs. 46 percent opposed.

Further, this poll, produced for ABC by Langer Research Associates, finds that 39 percent overall “strongly” disapprove of the cuts — but that soars to 66 percent of those who say they’ve been harmed in a major way.

Despite these results, I’ll stick to my earlier prediction: this isn’t enough to affect Congress. Overall, disapproval of the sequester has gone up only three points since March, and by the time that number gets much higher, September will be here and the dumb sequester cuts will be gone. Congress will replace them with more targeted cuts in the FY2014 budget, and those targets will be selected to minimize the yelling from interest groups they care about. Republicans may need to gut things out a bit this summer, but they’ll manage to hang on.