It’s possible that the biggest news of the week might not be either the Boston bombings or today’s failure of gun legislation to pass the Senate. It might be this: 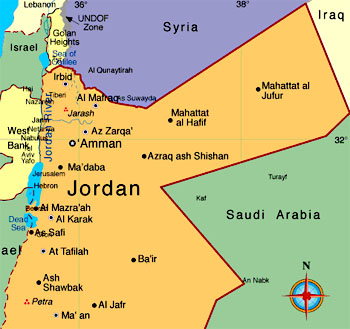 The Pentagon is sending about 200 troops to Jordan, the vanguard of a potential U.S. military force of 20,000 or more that could be deployed if the Obama administration decides to intervene in Syria to secure chemical weapons arsenals or to prevent the 2-year-old civil war from spilling into neighboring nations.

Troops from the 1st Armored Division will establish a small headquarters near Jordan’s border with Syria to help deliver humanitarian supplies for a growing flood of refugees and to plan for possible military operations, including a rapid buildup of American forces if the White House decides intervention is necessary, senior U.S. officials said.

…The move marks the first deployment that Pentagon officials explicitly described as a possible step toward direct military involvement in Syria….U.S. officials say they have stepped up preparations because the Syrian civil war shows few signs of abating, and a political settlement that includes the departure of President Bashar Assad appears increasingly unlikely.

Defense Secretary Chuck Hagel insists that military intervention in Syria is still an “option of last resort,” but once operations like this start to ramp up, they often acquire a momentum of their own. This is something to keep a very, very close eye on.