From Mike Konczal, summarizing a new study that says Carmen Reinhart and Ken Rogoff made a coding error in a famous paper claiming that economic growth slows down in countries with debt levels above 90 percent of GDP:

If this error turns out to be an actual mistake Reinhart-Rogoff made, well, all I can hope is that future historians note that one of the core empirical points providing the intellectual foundation 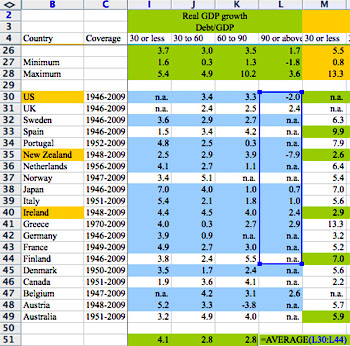 for the global move to austerity in the early 2010s was based on someone accidentally not updating a row formula in Excel.

In an update, Konczal tries to be a killjoy:

People are responding to the Excel error, and that is important to document. But from a data point of view, the exclusion of the Post-World War II [data] is particularly troublesome, as that is driving the negative results. This needs to be explained, as does the weighting, which compresses the long periods of average growth and high debt.

Yeah, yeah. The authors of the study suggest that R&R’s paper has three separate problems: (a) exclusion of some high-growth/high-debt years following WWII, (b) weighting of slow-growth episodes in a dubious way, and (c) the Excel error. I assume that Reinhart and Rogoff will respond to all of this at some point.

In the meantime, though, I prefer to think of this as the Excel Error Heard Round the World.