New York mayor Michael Bloomberg said today that the Manchin-Toomey gun legislation failed because senators are afraid of the NRA:

Today’s vote is a damning indictment of the stranglehold that special interests have on Washington. More than 40 US senators would rather turn their backs on the 90% of Americans who support comprehensive background checks than buck the increasingly extremist wing of the gun lobby.

The implication here is that there are a bunch of senators who wanted to vote for M-T, but didn’t because they were afraid of retaliation from the NRA. For the most part, though, that’s not really right. The NRA certainly has the power to make life miserable for politicians who vote against them, but here’s their real power: 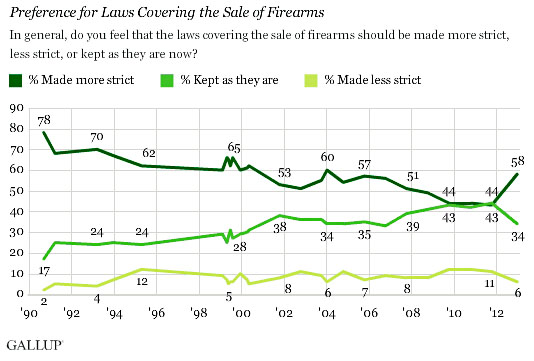 Generic support for gun control fell from 78 percent to 44 percent over the past two decades. Over that time, the NRA persuaded the public that gun control was a bad idea, and it paid off for them today. The upward blip in support following the Sandy Hook massacre is probably fairly ephemeral, but even if it’s not, 58 percent support just isn’t enough to pass contentious legislation. You generally need two-thirds or more. Even 70 percent support in 1994 was only barely enough to pass a modest assault weapons ban.

That’s the power of the NRA. They’ve worked hard to get the public on their side, and that brings politicians along automatically. They don’t really need to threaten conservative senators to get their support because conservative senators already agree with them. That agreement is strong enough that even a watered-down background check bill with 90 percent public support can’t overcome a filibuster, and renewal of the assault weapons ban is just flatly out of the question.

President Obama was right to call this “round one.” This kind of thing is a long-term fight for public opinion, and only after you get the public firmly on your side do you have any real chance of passing serious legislation. So the question today for liberals is simple: Is this issue important enough to keep banging away on it for years on end, the way the NRA does? If not, nothing will ever happen.