I’d really love some pollster to figure how what % of Americans know how many Gitmo detainees have been cleared for release.

I believe the answer is about 40 percent—but, like Marcy, I doubt that many people know this. Her tweet was prompted by an op-ed today in the New York Times by Samil Naji al Hasan Moqbel, a Yemeni hunger striker at Guantanamo who is being force fed:

I’ve been detained at Guantánamo for 11 years and three months. I have never been charged with any crime. I have never received a trial…The only reason I am still here is that President Obama refuses to send any detainees back to Yemen. This makes no sense…I do not want to die here, but until 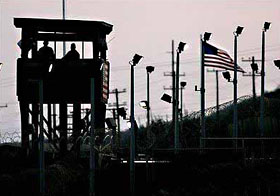 President Obama and Yemen’s president do something, that is what I risk every day.

Where is my government? I will submit to any “security measures” they want in order to go home, even though they are totally unnecessary.

Yemen’s previous administration prevented the release of many detainees by demanding enormous payments from the US before it would accept them. The current administration has changed course, and has requested that all Yemeni nationals be repatriated to Sana’a. But now it’s the U.S. that refuses to deal. Andy Worthington reports that after the failed underwear bomber plot:

Obama responded to a wave of hysteria by announcing a moratorium on releasing any cleared Yemenis from Guantanamo. That order remains in place two years and eight months later, even though it is a monstrous injustice to continue holding men cleared for release and to pander to populist fear-mongering by insinuating that the very fact of being Yemeni is tantamount to being a terrorist—or, at the very least, a terrorist sympathizer.

But it’s not entirely Obama’s fault, reports the Boston Globe:

Congress bears much of the blame, because lawmakers have included provisions in the annual defense authorization bill that make it harder to close the facility. They prohibit the use of funds to transfer detainees to the United States for trial in federal court and require the secretary of defense to certify that detainees cleared for release are sent to countries that have “agreed to take effective steps to ensure that the transferred person does not pose a future threat to the United States, its citizens or its allies.” That sweeping language has had a chilling effect. No one can give an absolute guarantee that detainees won’t go back to fighting, just as no one can ensure that criminals released from US prisons won’t go back to crime. As Charles Stimson, who headed detainee affairs under George W. Bush, points out: “You have to tolerate some kind of risk.”

….Obama should muster the political courage to stand up to Congress on Guantanamo. If his secretary of defense is unable to certify a transfer under the tough provisions, Obama retains the ability to transfer prisoners with a “national security waiver” — a power he has never used….A new, democratically elected government in Yemen is putting together a plan to take responsibility for its detainees. About a third of the 88 men from Yemen have already been cleared for release. Keeping them at Guantanamo just because of their nationality flies in the face of justice. The US government should support the democratic transition in Yemen by providing the financial, military, and intelligence support necessary to send them home and keep an eye on them.

Some detainees are tougher to deal with than others. But those who have already been cleared for release, and which Yemen is willing to accept, should be the easiest. Moqbel might or might not fall into this category (his status is unclear), but there are at least a couple dozen Yemenis who do. Obama should let them go.