Over at Vox, a trio of IMF researchers summarize their explanation from the latest World Economic Outlook of why the recovery from the Great Recession has been so much slower than previous recessions. The two charts below tell most of the story:

Rightly or wrongly,1 most central governments have a limited tolerance for debt, and a high debt level therefore restricts their responses to a serious recession. That’s what happened this time around, and it will be even worse next time if debt levels don’t come down over the long term.

1But which is it, rightly or wrongly? Mostly it’s wrong, especially in the short term during and after a serious recession, but it’s not entirely wrong. There’s certainly some point at which debt service can overwhelm a government, and if investors feel that a country is headed toward that point with nothing to stop it, they’ll start demanding higher interest rates on government bonds. Needless to say, this just makes debt service problems even worse, leading to a death spiral of sorts. So the trajectory of debt probably matters, even if there’s no special debt level at which things fall apart. This, along with the plain fact that governments are spooked by debt, whether we like it or not, is one of the reasons that long-term deficit reduction really is pretty important. 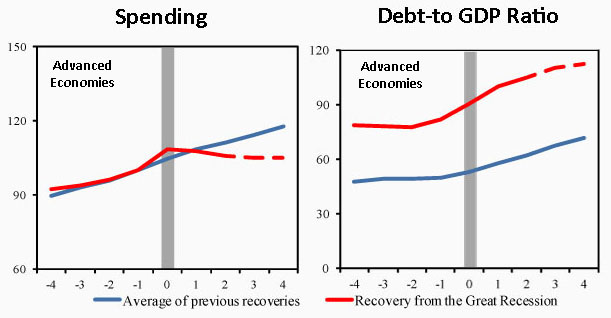