Several years ago Europe instituted a continent-wide cap-and-trade system for carbon emissions called ETS. It was decidedly imperfect, and has gone through several revisions since it started. Recently, however, energy demand has declined, which has left Europe awash in 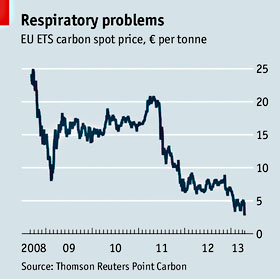 carbon permits. As a result, the price of carbon permits has dropped off a cliff, and they’re now so cheap that they’re having virtually no effect. So does this mean the whole program is a failure? David Roberts asks everyone to calm down:

Now, as it happens, the recession is what did most of the work to put the EU on that pathway. Complementary clean-energy policies (renewable energy mandates, feed-in tariffs) also played a big role. That just didn’t leave much work for a carbon price to do. The EU doesn’t need a high price on carbon to stay on the emissions-cutting pathway, at least in the short term, so the short-term price on carbon is low. Presumably, when the EU economy picks back up, there will be more work for a carbon price to do. If so, the price will go up. Cap-and-trade programs are designed to be responsive to circumstances.

Lemme just emphasize: Insofar as you are happy with the carbon pathway your cap-and-trade system prescribes, the fact that carbon is cheap is good news. Who wants high prices for high prices’ sake?

Everyone has always known about the basic tradeoff between a carbon tax and a cap-and-trade system. The virtue of a tax is that it’s predictable: everyone knows both the current and future tax rates and can make investments based on them. The downside is that you have to take a guess at what tax rate will produce the level of carbon emissions you want, and you might guess wrong.

Cap-and-trade is exactly the opposite. Its virtue is that it will unquestionably keep you below your carbon cap. The downside is that carbon prices will jump up and down depending both on energy demand and on technology advances. This makes business planning tricky.

I’ve always preferred cap-and-trade because I think the virtue of targeting the thing we actually care about—the amount of carbon emitted—is more important than guaranteeing businesses a known tax level decades into the future. Businesses already put up with large changes in the price of energy itself, and I suspect they can handle price changes in carbon permits too.

But I’ll add one more virtue that David doesn’t mention: cap-and-trade is countercyclical. During a recession, demand for permits will go down and therefore so will permit prices. This is good, because it has a stimulative effect on the economy. Conversely, during economic expansions, demand for permits will go up and so will permit prices. This is also good, because it will tend to cool down the economy a bit. In neither case will the effect be huge, but it’s still a net positive.

I’ve got no problem with a carbon tax. The arguments between a tax and a permit trading plan strike me as pretty finely balanced. Nonetheless, the fact that permit prices have fallen during a recession isn’t evidence that cap-and-trade doesn’t work. On the contrary, it’s evidence that it’s working exactly the way it should.