Glenn Greenwald points today to a column by former Bush speechwriter David Frum, in which Frum discusses what he saw inside the White House during the runup to the Iraq war:

I was less impressed by [Ahmed] Chalabi than were some others in the Bush administration. However, since one of those ‘others’ was Vice President Cheney, it didn’t matter what I thought. In 2002, Chalabi joined the annual summer retreat of the American Enterprise Institute near Vail, Colorado. He and Cheney spent long hours together, contemplating the possibilities of a Western-oriented 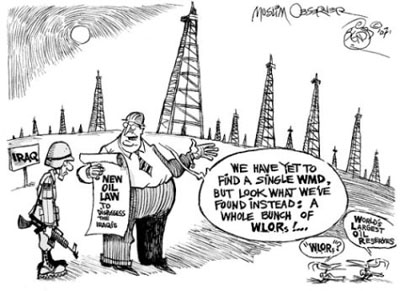 Iraq: an additional source of oil, an alternative to US dependency on an unstable-looking Saudi Arabia.

I’m trying to remember if this is even a revelation anymore. Certainly anyone who argued at the time that oil was one of the motivations for the Iraq War was ridiculed mercilessly, but since then it’s been all but obvious, right? There was the fact that the only building American troops protected during the post-invasion rioting was the Oil Ministry. There were all those lovely maps of Iraqi oil fields that we learned had been part of Dick Cheney’s energy task force since long before 9/11. There was the urgency over restoring Iraq’s oil production that seemed to take precedence over almost everything else. Hell, no less than Alan Greenspan conceded after the fact that the war was “largely about oil.”

Besides, in a broader sense, even lots of war supporters acknowledged that, in general, American interest in the Middle East is driven strongly by our interest in the stability of Middle East oil supplies. That’s not exactly a news flash, and if it’s true in general then it must also have been at least part of the specific motivation for getting rid of Saddam Hussein. After all, until we did that, the oil sanctions against Iraq would stay in place.

Still, it’s good to hear this from the horse’s mouth. The Iraq war wasn’t all about oil, but there’s not much question that it was in the forefront of a lot of people’s minds.