Rand Paul’s old-school talking filibuster about drone strikes on American soil lasted until just after midnight yesterday, and it won lots of praise. At least it was a serious filibuster, after all, one that required some serious effort. It wasn’t one of those faux filibusters where you 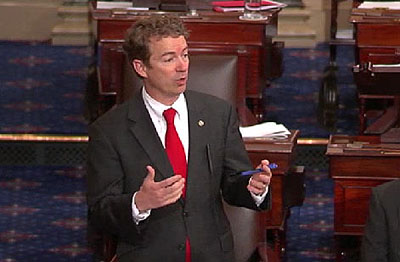 just announce that you’re requiring 60 votes and that’s the end of it. But Sarah Blinder isn’t quite so impressed:

First….The motivation of recent reformers has been to reduce filibustering by raising the costs of obstruction for the minority….But as [Jonathan] Bernstein points out, Paul believes in his cause, and it plays well with his constituencies. On the physical front, the tag-team of GOP senators rallying to Paul’s cause also lessened the burden on Paul (as would have a pair of filibuster-proof shoes). That said, today’s filibuster was a little unusual. The majority seemed unfazed by giving up the day to Paul’s filibuster, perhaps because the rest of Washington was shutdown for a pseudo-snow storm.

….Second, keep in mind that this was a double-filibuster day. The nomination of Caitlin Halligan for the DC Court of Appeals was blocked, failing for the second time to secure cloture….On a day with two successful minority filibusters (at least in consuming floor time and deterring the majority from its agenda), we can see why the majority might be reticent to make senators talk.

Third, let’s not lose sight of the target of Rand’s filibuster: The head of the CIA. Although the chief spook is not technically in the president’s cabinet, the position certainly falls within the ranks of nominations that have typically been protected from filibusters. Granted, that norm was trampled with the Hagel filibuster for Secretary of Defense. But rather than seeing the potential upside of today’s talking filibuster, I can’t help but see the downside: In an age of intense policy and political differences between the parties, no corner of Senate business is immune to filibusters.

Rand Paul’s talking filibuster was good theater, and it got high marks from liberals partly because he happened to be talking about something they care about too. Keep in mind, though, that one of the reasons it was effective was precisely because this is so rare. If talking filibusters became the norm, you wouldn’t end up on the front page of the Washington Post for conducting one. What’s more, tag teaming makes it easy enough to keep talking that the majority would know they had no real way to fight back. On non-snow days, they’d just cave in immediately and we’d essentially be back to where we are now, where the mere threat of a filibuster is all it takes.

Reid and the others let Paul talk because they didn’t really care all that much, and because they knew they had the votes to invoke cloture whenever they wanted to. For his part, Paul ended his filibuster because he never intended to keep it going forever in the first place. He wanted publicity, and never really thought that he could block John Brennan’s nomination. So Blinder is right: this isn’t much of a test case. If talking filibusters became the norm, it’s unlikely that very much would change in practice.