Phil Anschutz, the billionaire owner of AEG, recently announced that he had decided not to sell his company after all and instead planned to take back control into his own hands. This matters in Los Angeles because Anschutz has always been sort of lukewarm about the idea of AEG building a downtown stadium to lure an NFL team, and he’s now signaling that he may have had enough. Michael Hiltzik hopes that he really has:

Anschutz has spent, by his accounting, between $45 million and $55 million of his own money to push the downtown project along. City officials have been herded, like cattle to the abattoir, into pledging to do everything in their power to get the stadium built — though not with a dime of taxpayer funds, wink wink.

One would think that in exchange for these bennies the league would have been moved to deal with Los Angeles, its business community and its residents with good faith and transparency. Instead, it has offered the same unceasing tergiversations, with nary a clue about what would constitute a suitable deal. Well, not entirely 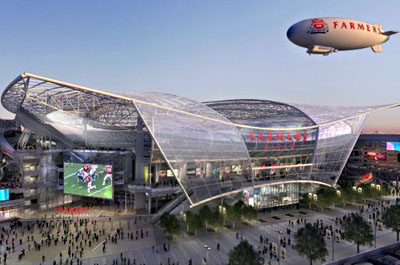 no clue: Plainly the NFL wants a deal in which the taxpayers put up all the money for a stadium, and the league’s billionaires take all the profits.

The willingness of local communities to subsidize billionaire football team owners with truly astronomical sums never ceases to astonish me. Los Angeles has actually been pretty good about telling the NFL that maybe a bunch of titans of free enterprise shouldn’t expect taxpayer help for what is, after all, an extremely lucrative private enterprise, and I can only hope that they stick to their guns. As Hiltzik says, city leaders have already caved a little bit by allowing a stadium deal to bypass the usual regulatory hurdles, but that didn’t bother me too much since I figured it was the bare minimum that any big stadium project gets in a big city. So far they haven’t gone any further, and that’s why there’s still no NFL team in Los Angeles. No huge taxpayer subsidies, no football.

Which is fine with me. Let other cities play the sucker. I’m not sure why so many civic leaders are so eager to get bullied and bamboozled by the NFL, but LA is doing the country a favor by setting a good example. They should keep it up.