Ed Kilgore points to an intriguing Joshua Green story in BusinessWeek today: at a point during the Republican primary when Mitt Romney was struggling, Newt Gingrich and Rick Santorum had serious talks about creating a unity ticket:

The negotiations quickly intensified. “We had a series of closed-door meetings about it,” Conway says. Conway, Walker, and Randy Evans represented Team Gingrich; Brabender spoke for Santorum. “Initially, it was through 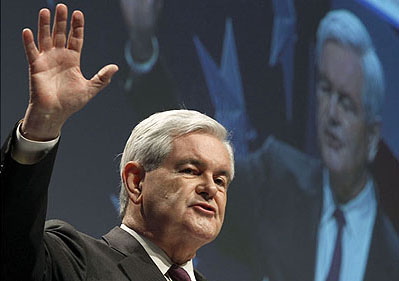 staff,” Conway says. “Then Rick and Newt did talk by phone for quite awhile.”

Finally, the two candidates spoke face-to-face at an energy forum just before the [Michigan] primary. Gingrich made an elaborate historical argument that….

Hey! Why did I cut off the story? Newt Gingrich made an elaborate historical argument for what? That they should run on a platform of abolishing the Fed? Building alligator-filled moats along the Mexican border? Blasting North Korea to bits with a space-based laser? Paying off the national debt with natural gas royalties?

Not quite. It turns out that Gingrich made an elaborate historical argument for….why Newt Gingrich should head the ticket, with Santorum settling for veep. I’ll bet you wish you could have been a fly on the wall for that little lecture, don’t you?

This is all sort of fascinating, in a train-wreck kind of way, and I’m glad Green wrote about it. But can I just say that, no, Gingrich and Santorum never really came close to making a deal. The question of who gets to be president and who gets to be VP is the only real question in negotiations like this. If they were arguing about that, they hadn’t even gotten started.