There’s an argument to be made for high level scrutiny being applied to federal judges generally—it’s a lifetime appointment, after all—and for appellate judges in particular—they set precedent that guides thousands of cases. While my longstanding view is that a 60 vote requirement for confirmation is extraconstitutional, if not unconstitutional, I’m amenable to the argument that judicial nominees ought to be well within the mainstream; presidents shouldn’t be able to radicalize the legal system for decades to come by virtue of a slim Senate majority.

But we’re well past that. Senate Republicans aren’t standing firm against radical judges but against Democratic judges. And, no, the two aren’t synonymous; the American people have, after all, elected a Democratic president two cycles in a row and Democrats got more votes for both the House and Senate as well.

Neither party has been entirely consistent on this, nor entirely on the side of the angels. The problem is that obstruction keeps getting ratcheted upward, and it’s now gotten to the point where Republicans are not only filibustering nominees they truly find objectionable, but anyone who has ever in their careers written something that a conservative interest group objects to. In the recent case of Caitlin Halligan, it was a brief she wrote about holding gun 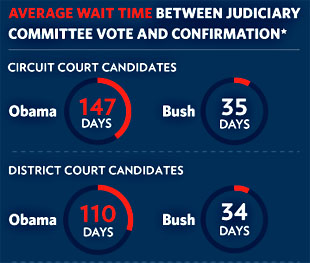 manufacturers liable for their products. Not only was this only one document in a long career, it’s a document that doesn’t even represent Halligan’s own views. It was written at the direction of her boss at the time, New York Attorney General Andrew Cuomo.

But although filibustering Halligan was pretty indefensible, that’s still not the worst of it. Even nominees that Republicans don’t object to are being stonewalled. Richard Taranto was confirmed earlier this week for a judgeship 91-0, but only after being forced to wait 484 days. Why? Because the longer the process is drawn out, the less other business the Senate can conduct. Judicial nominees are now mere bargaining chips in Republican games to keep the Senate from accomplishing anything. The White House infographic on the right tells the basic story.

I can only assume that Republicans are banking on Democrats being unwilling to escalate this war even further the next time a Republican is president. Or maybe they’re treating this the same way they do the deficit: if they make things bad enough on their watch, Democrats practically have no choice except to repair things on theirs. Both seem like risky bets. If there’s a grand bargain we need right now, it’s not really over the deficit. It’s over the growing inability to effectively govern the country because too many positions, both judicial and executive, are being left vacant for purely political reasons. Maybe we need a bit of presidential schmoozing over this.