This news is not new—it’s based on a survey done more than a year ago—but it’s news worth repeating anyway. Here are Larry Bartels and Benjamin Page in the LA Times today on the political priorities of the very rich:

Our research found that the biggest concern of this top 1% of wealth-holders was curbing budget deficits and government spending. When surveyed, they ranked those things as priorities three times as often as they did unemployment — and 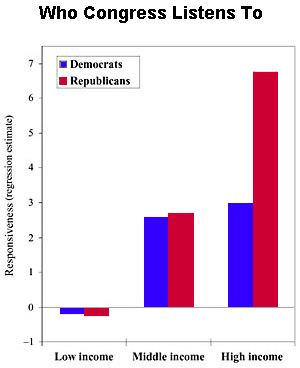 far more often than any other issue.

….They were also much less likely to favor raising taxes on high-income people, instead advocating that entitlement programs like Social Security and healthcare be cut to balance the budget.

….While the wealthy favored more government spending on infrastructure, scientific research and aid to education, they leaned toward cutting nearly everything else. Even with education, they opposed things that most Americans favor.

….The wealthy opposed — while most Americans favor — instituting a system of national health insurance, raising the minimum wage to above poverty levels, increasing the Earned Income Tax Credit and providing a “decent standard of living” for the unemployed. They were also against the federal government helping with or providing jobs for those who cannot find private employment.

….Unlike most Americans, wealthy respondents opposed increased regulation of large corporations and raising the “cap” that exempts income above $113,700 from the FICA payroll tax. And unlike most Americans, they oppose relying heavily on corporate taxes to raise revenue and oppose taxing the rich to redistribute wealth.

A large body of research, from Bartels and others, demonstrates that lawmakers respond to the desires of the upper middle class and the wealthy, but not much to anyone else. So if you’re wondering why official Washington is all atwitter over budget deficits, but doesn’t seem to care much about unemployment, this is why. It’s because that’s what rich people care about.