It really is a little shocking in retrospect how entrenched the Gore stuff has become.

Matt is reacting to a Republican ad that tries to pretend that Rep. Ed Markey is taking credit for inventing Google and satellite TV. You know, just like Al Gore invented the internet. Yuck yuck.

Gore aside, I’ve always found it sort of fascinating how obsessed conservatives get with some of their pet rocks. Last night I happened to surf by Sean Hannity’s show for about ten seconds, and he was blathering on about the canceled White House tours. Jesus, I thought. They’re still bellyaching 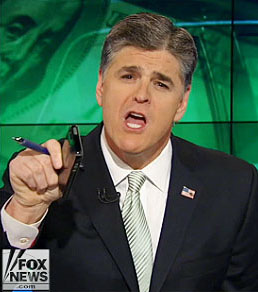 about that? Hannity’s designated liberal punching bag (sorry, didn’t catch who it was) seemed to feel the same way. She mostly just rolled her eyes, unable to work up the energy to pretend to take this seriously.

Do we liberals have our own pet rocks like this? It’s never quite seemed like it to me. Obviously we have ideological passions that we hammer on constantly, just like conservatives do, and it’s true that putting up pictures of “Mission Accomplished” never gets old. But on the right, there seems to be a never-ending parade of these ridiculous little things that take on a life of their own and just never go away. When newer pet rocks come along, they just acquire elder statesman status and become part of right-wing lore. In the case of the White House tours, it’s apparently all part of a Michele Bachmann-inspired conservative obsession with the curious notion that Obama lives like an emperor, complete with dancing girls dropping peeled grapes into his mouth during trips on Air Force One that he orders just because he wants to take advantage of the gourmet chefs on board and maybe get a nice view of the Potomac. Or something.

There’s a million things like this, and only a few achieve mainstream status, like the birther nonsense. The rest just ripple endlessly in the primordial ooze of conservative websites, radio shows, and Fox News. I dunno. Maybe I just don’t hang out enough on uber-lefty sites to see how much we do it too. But conservatives sure do seem to thrive on a continuing parade of weirdly invented, personality-driven scandalettes in a way that liberals don’t.