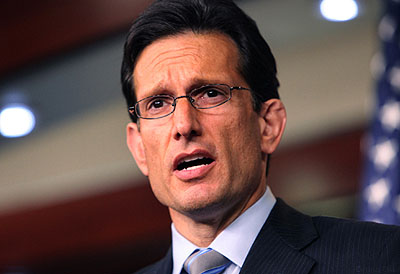 spending and tackle budget deficits.” That seems like good advice. So what’s on tap?

Mr. Cantor plans to emphasize existing GOP policies, such as educational initiatives that the party says would mean more school choice for students who often are forced to attend poorly performing public schools, the aide said….The Virginia lawmaker also intends to discuss the need to repeal a tax on medical devices that was introduced as part of the Affordable Care Act, arguing that it was raising health-care costs for people; the need to allow highly skilled foreign nationals educated at U.S. colleges to remain in the country after they graduate; and the need to simplify the U.S. tax code, which would save families money and free up more family time.

Of course, there’s also the bit about allowing highly skilled foreign nationals to stay here after they graduate from college. There’s nothing new there, either, but it’s not something Republicans usually emphasize much outside of talks to corporate audiences. It’ll be interesting to see how that goes over if they start pushing it at their next series of town hall confabs.